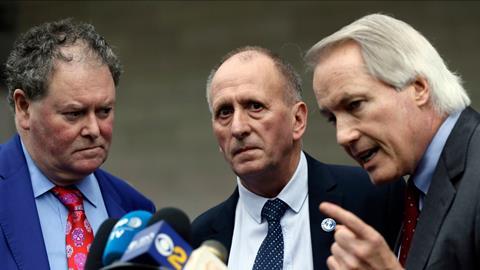 The ruling by a Californian jury that billionaire Elon Musk did not libel British cave diver Vernon Unsworth in a tweet was an error in law, according to the London solicitor who brought the action. However defamation specialist Mark Stephens, of London full-service firm Howard Kennedy, told the Gazette that no decision had been made on an appeal.

Stephens (pictured above, left) said the case hinged on whether the tweeted phrase 'pedo guy' was an accusation of a criminal offence or an insult. For Musk, Alex Spiro, of New York firm Quinn Emanuel Urquhart & Sullivan, had told the court that the tweet was an offhand comment made in the course of an argument between the two men, which no-one could be expected to take seriously.

However Stephens said the jury of eight people had erred in assuming that the tweet would have to identify Unsworth by name in order to be defamatory. While his client was not named in the offending tweet, he was clearly identifiable - indeed 'the only way he got to learn of it was that people drew it to his attention', he said.

A judge sitting without a jury, as is the norm in England and Wales defamation cases, would not have made that mistake, Stephens said: 'It is clear that [Unsworth] would have won here.' However Musk had refused to have the case heard in London.

Stephens said the option of an appeal was still open, though this would be 'quite difficult'. It would involve asking the trial judge to vacate the jury's verdict and order a retrial, he said. The action, which sought $5m in direct damages and $185m in exemplary damages, was brought under a no win, no fee arrangement.

British news outlets greeted the court's verdict on Friday with surprise. Under the headline 'A licence to troll', today's Daily Mail comments that the 'shocking travesty of justice' will encourage increasingly debased debate. 'The world's legal systems must get to grips with this social media "Wild West",' a leading article opines.

BBC technology specialist Dave Lee predicted that Musk's so-called 'JDart defence' - a joke deleted with apology and responsive tweets - would be widely used by anyone who 'who, in the heat of the moment, says something idiotic online'.