A former rear admiral in the Royal Navy will be the next chief executive of the Bar Council, the representative body announced today. Malcolm Cree CBE will take up the post in August after current chief executive Stephen Crowne retires. 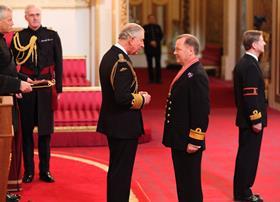 Receiving his CBE from HRH The Prince of Wales in 2016.

Cree served in the Royal Navy for 35 years, joining while reading history at Bristol University. He served in the Gulf during the Tanker War and Adriatic during the Bosnian crisis. He was the executive officer on HMS Chatham at the 1997 Hong Kong handover and commanded the destroyer HMS Gloucester.

Following his promotion to flag rank he became chief of staff (integrated change programme) playing a leading role in controversial reforms which aimed to modernise the armed services.

Most recently he worked at as a principal consultant at business consultancy Catalyze. He has a special interest in the practical application of decision theory, the science of understanding the decision-making process.

The Bar Council said the appointment comes at a time when the organisation ‘has begun to renew its strategy for the future’.

Andrew Langdon QC, chair of the bar, said he was delighted that Cree had taken on the role. ‘Malcolm brings with him strong leadership skills which will help the Bar Council navigate the diverse and complex environment in which the Bar’s professional body operates. He will be an important addition to the team,’ he said.

Cree said: ‘The barristers’ profession is held in high esteem in the UK and internationally and the Bar Council has a strong reputation. I look forward to playing a key role in shaping the future of the Bar Council.’

Cree has an honours degree in History from Bristol University, a masters in international security and strategy from King’s College London. He is also an associate professor of Exeter University’s Strategy and Security Institute.

An advertisement posted online last month said the position came with a salary of 'circa £160,000'.