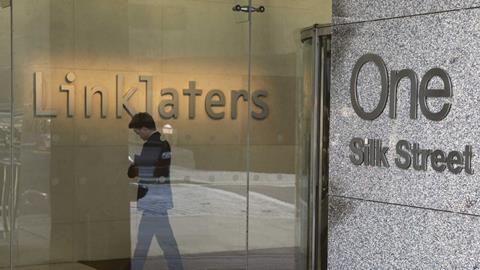 The firm said today it appreciates the need to be ‘as transparent as possible’. The inclusion of partners nearly trebles the mean pay gap between men and women, from 23.2% to 60.03%.

Linklaters, which reported its initial figures in February, was the first of the magic circle firms to publish figures as required by the Equality Act 2010 (Gender Pay Gap Information) Regulations 2017. That data showed women were paid 23.2% less than males per hour (mean). Women’s bonuses were 57.9% lower than men’s.

The firm said: ‘Ensuring gender equality and achieving gender balance is a global strategic priority for Linklaters. It is embedded in our strategy and reinforced by our gender targets, which this year we exceeded in appointing 37% new female partners. We will work hard to keep up the momentum on achieving this, and our other diversity goals.’

Partner data has been a hot topic since the country’s major professional services firms, EY, PwC, Deloitte and KPMG, all re-published their reports to include equity partners - their highest earners and predominantly male. Business leaders and politicians had called for partners to be included in the interests of transparency, despite the regulations applying only to ‘employees’.