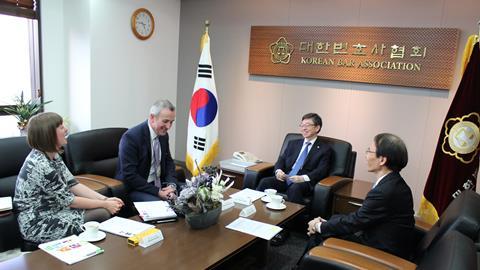 The Law Society has stressed its eagerness to drum up support for a future legal services agreement with South Korea, saying legal partnerships will be a ‘key component’ of any trade agreement.

Law Society President Robert Bourns has been in Korea this week to meet local firms as well as the Korean Bar Association.

Currently UK firms are able to operate in the country as part of the EU-Korea Free Trade Agreement. So far, five UK firms, Stephenson Harwood, Herbert Smith Freehills, Clifford Chance, Linklaters and Allen & Overy, have entered the Korean market under the agreement.

However, the Gazette previously reported that last June’s vote to leave the EU had heightened the risk for Korea-based firms as it is an EU deal. Following Brexit the  the UK will have to agree a bilateral trade agreement with Korea.

Bourns told the Gazette: ‘South Korea is an important trading partner for the UK and has a great reputation as an open, exporting nation with an international outlook - very much the mind-set that the UK, British companies and the solicitors’ profession is pleased to work with, now as well as post-Brexit.’

He said he had emphasised that the legal profession has ‘built a worldwide network of provision’, is collaborative and keen to be part of the international community of lawyers.

‘The message has been well received, notwithstanding some nervousness that further opening of the market in Korea will place local firms at a disadvantage,’ Bourns said.