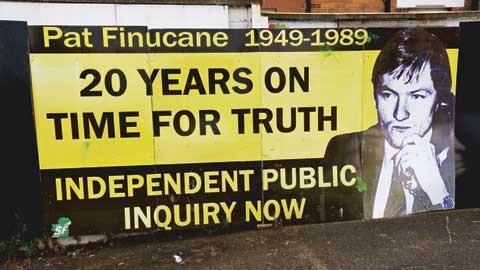 Lawyers in the line of fire

Lawyers across the globe are being murdered, unlawfully detained or assaulted for going about their work of representing clients.

Defending human rights is a dangerous career choice, but there seems no shortage of people willing to risk their lives for the common good. One such defender is veteran international human rights lawyer Richard Harvey. He gave the keynote address at a conference titled Challenging the Oppression of Lawyers in Times of Conflict, held at Queen’s University, Belfast last month.

His opening words were: ‘Those who would give up essential liberty to purchase a little temporary safety deserve neither liberty nor safety.’ He was quoting Benjamin Franklin, one of the US’s founding fathers. Franklin’s words, dating from 1759, still have resonance today, said Harvey, before proceeding to outline his long career in championing the right of lawyers to do their job effectively and in safety.

In 1976, he travelled to Germany, on behalf of the Haldane Society of Socialist Lawyers, to meet the defence lawyers for urban guerrilla gang Baader- Meinhof. The German state had amended its laws to take away the gang’s right to choose their own lawyers and Harvey, in a move likely to alienate all but the most committed supporters of the rule of law, added his voice to the protests this measure had provoked. On returning to the UK, he was interviewed by the BBC and discovered ‘those plummy voices were not on our side at all’, he said.

Five years later, his criticism of Diplock courts, which the UK government had introduced to Northern Ireland in August 1973 and where cases were heard by a judge sitting alone, suspending the right to trial by jury, also caused a furore. It even led one newspaper to accuse him of backing the IRA. ‘Even today I’m sometimes accused of supporting the IRA,’ said Harvey, ‘which shows how headlines stick.’

Still on the subject of Northern Ireland, Harvey said: ‘Human rights lawyers in Belfast report that they are getting the same threats from the police today that they experienced in the 1970s.’ Belfast lawyers Pat Finucane and Rosemary Nelson were killed in 1989 and 1999 respectively. ‘There have been accusations of collusion between loyalists and the security services,’ Harvey said. ‘There cannot be public confidence in any government agency that colludes by turning a blind eye to the wrongful acts of its agents.

‘When the state ignores the public interest, what can we do? All of us can do something. A human rights conference where delegates leave and do nothing is a failure.’

Professor Kieran McEvoy of Queen’s University examined the ways in which Northern Ireland lawyers responded to the challenges of entrenched discrimination, sustained political violence and the transition from conflict. ‘Northern Ireland is a small place, but society was uniquely divided along sectarian lines,’ he said. ‘Those lawyers who stood up for civil liberties were self-evidently heroes, and yet they were swimming against the tide within their own profession and were dismissed as politicising the law.’

He said the Troubles were ‘an era characterised by the failure of the law and lawyers’, and by a ‘culture of quietism’ in which it was ‘best not to discuss these matters’. It was also an era in which lawyers sought refuge in ‘legal positivism’, said McEvoy, which held that ‘the law is the law is the law, without a political or moral dimension’. He said: ‘It was safe territory for lawyers. If you are in the middle of a war, batten down the hatches. There was a real threat to lawyers’ lives.’

He concluded with two questions: ‘What is it legitimate to expect from lawyers in a conflict? Should they all be fearless human rights activists or simply skilled advocates for clients?’

One Belfast firm, KRW Law, chose the human rights option and, according to partner Niall Murphy, was experiencing ‘worse intimidation this year’ than it had since the peace process began. On 10 August 2013, Northern Ireland secretary Theresa Villiers sought an emergency – and secret – injunction against the firm to stop it revealing the findings of a 40-year-old inquest, he told the conference. Another government minister had passed the inquest papers to the firm that same afternoon.

Going further back, Murphy showed the Gazette a 2004 message that the police had forwarded to the firm from a rogue loyalist group. The message said that the group was going to attack ‘Kevin Winters & Co’, as the firm used to be known, ‘due to the fact that they are still dealing with dissident republicans’. Murphy alleged that the police had also made hostile moves against the firm, including threats of arrests, verbal abuse and covert surveillance. ‘A detective constable told me I was a liar and unfit to represent clients,’ said Murphy.

Moving outside the UK, Kurdish human rights activist and lawyer Deniz Arbet Nejbir said that Turkey has become ‘an open prison for lawyers, since it imprisons more of them than any other country in the world’. He blamed the repression and intimidation of Kurdish lawyers on the ‘politics of denial towards multiculturalism within Turkey’.

Turkey’s application to accede to the EU raised hopes that Turkey would become a more democratic country, but in fact the repression of Kurdish lawyers has worsened since November 2011, when 46 lawyers acting on behalf of Kurdistan Workers Party leader Abdullah Ocalan were arrested, Nejbir said. Some 15 more lawyers seeking to represent the detained lawyers were also subsequently arrested.

He recounted how a judge showed a blatant assumption of guilt when he warned a defendant to keep quiet until ‘I consider the point you want to make when I sentence you’.

Solicitor and human rights law professor Philip Leach, of Middlesex University, is also director of the European Human Rights Advocacy Centre. He told the conference that his focus was Russia, particularly the North Caucasus republics of Ingushetia, Chechnya and Dagestan. It is an area where abuses are ‘systemic and egregious’, he alleged, and where the acquittal rate in court is just 0.7%. Leach said: ‘The court system is designed to hand out sentences, not justice.’

He is pessimistic about the prospects for the rule of law, citing a new Russian law that targets non-governmental organisations (NGOs) and others that receive foreign funding and that will in future have to register as foreign agents. ‘The term has the same implications in Russian as it does in English,’ said Leach. ‘It is an existential threat to NGOs.’

The threats to lawyers take many forms, said Leach. In one instance, a lawyer’s 17-year-old son was abducted for some hours; the family has now left the region. Other lawyers have received death threats, including one who was subsequently injured in a suspicious car accident. Clients are threatened, too, he alleged. When lawyers plan to take a case to Strasbourg, rumours are spread about their incompetence or links with state authorities. One such lawyer who went to Strasbourg was abducted and has never been seen again.

Lawyers’ phones are tapped, their offices searched and libel actions are brought against them, alleged Leach. A female lawyer was beaten up at a police station for seeking to see her client; when she complained, she was prosecuted and had restrictions placed on her movements. Another female lawyer was abducted and her body later found in another of the region’s republics, North Ossetia. A lawyer representing a journalist who had reported on violations in Chechnya was killed in Moscow. Another was shot dead on the street in Dagestan.

Andrea Becker, a London-based barrister who has spent the last 15 years focusing on human rights and humanitarian law within the Israel-Palestine conflict, told the conference much the same story. She talked of the ‘organised vandalism’ of the Israeli soldiers who raided her office in Palestine, smashing computers, severing cables, taking hard disks and laptops away and ‘even despoiling the toilets’.

The West Bank is a country under occupation, she said, with ‘military checkpoints, roadblocks, curfews and roads for Israeli use only’. The physical barriers are reinforced by a ‘system of permits’, homes are demolished, agricultural land confiscated and farmers are routinely ‘shot at by soldiers’. The system of justice is ‘rigged’, she alleged, with a ‘94.7% conviction rate’, children routinely detained and claimants needing ‘a £5,000 deposit to bring an action against Israel to the courts’.

Becker said: ‘In Palestine, you learn about human rights because of their absence. Lawyers are not special in any way. We have the same problem getting to work and seeing clients. We all face the same risks, whether we are ambulance drivers or activists.’

Chair of the Law Society’s human rights committee, professor Sara Chandler of London South Bank University, spoke to the conference about the South American republic of Colombia, a nation racked by conflict for the last 60 years, with some five million displaced persons and 15 lawyers murdered so far in 2013. (See Gazette opinion at tinyurl.com/nvsl2kn).

Her final words were: ‘Get involved!’

How to get involved? The message from the conference was that not everyone is cut out to be a hero. But everyone can join a pressure group, write to their MP, confront an ambassador, observe trials, sign petitions and report what they learn. Everyone can also resist allowing the state to take away some of our liberty in the interests of security – before we find, to paraphrase Benjamin Franklin, that we are no longer worthy of freedom or security.