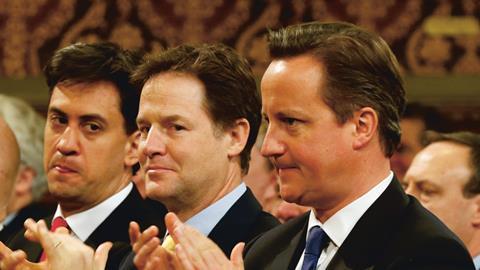 The general election manifestos are in – here’s our quick-fire summary of their headline pledges on law and justice.

The Greens are the only mainstream party pledging wholly to reverse the coalition’s legal aid cuts, which poignantly demonstrates how deeply this once mighty pillar of the welfare state has been eroded.

Equality before the law would become a fundamental constitutional right, the party says, ‘but this is only a reality if all can afford to use the law’.

Apart from a pledge ‘to ensure victims of domestic violence get the legal support they need to break free of violent relationships’, Labour’s manifesto has relatively little to say on legal aid and access to justice. The party had, however, already pledged to abandon ‘reckless’ two-tier contracting for criminal legal aid and repeal judicial review reforms.

The Lib Dems pledge to carry out an ‘immediate review’ of civil legal aid, judicial review and court fees, in consultation with the judiciary.

The party was, of course, part of an administration that backed civil legal aid scope cuts, restrictions on bringing JRs and a new 5% upfront levy for bringing claims valued at more than £10,000. But the Lib Dems now say they will ensure: legal aid is available to all those who need it; those of ‘modest means’ can bring applications for JR; and that court and tribunal fees do not put justice beyond the reach of those in need.

The latter pledge would mean ‘reversing any recent rises in upfront court fees that make justice unaffordable for many, and instead spreading the fee burden more fairly’.

On criminal legal aid, the Lib Dems promise ‘no further cuts’ without an impact assessment of ‘the viability of a competitive and diverse market of legal aid providers’.

Ukip does not mention legal aid at all, while the Conservatives commit only to ‘continue to review our legal aid systems’.

Both parties are comfortable with crime and justice defined for populist purposes as victims’ rights and bobbies on the beat.

But then so is Labour – which would take forward the recommendations of the Victims Taskforce report by Keir Starmer QC, Baroness Lawrence and Peter Neyroud.

These include the right to review cases when charges are not brought, a right to information so victims can be kept up to date with details of their case, and the right to ‘decency’ in the courtroom.

Other headline pledges from Labour include:

In criminal law, the Conservatives will ‘speed up justice’ by extending the use of police-led prosecutions. The scope of the unduly lenient scheme will be extended so a wider range of sentences can be challenged. And all publicly funded advocates will be given specialist victims training before becoming involved in serious sexual offences cases.

There will no devolution of justice and policing to Wales, with the Tory manifesto pledging that these issues will remain reserved for the UK parliament.

Plaid Cymru, by contrast, is seeking greater devolution of justice matters and wants to introduce a separate jurisdiction to codify the laws of Wales.

Like Ukip, the Conservatives are intent on severing the formal link between British courts and the European Court of Human Rights. Both would scrap the Human Rights Act and introduce a British Bill of Rights, making the UK Supreme Court the ultimate arbiter of human rights in the UK.

A new bill of rights ‘will reverse the mission creep that has meant human rights law being used for more and more purposes, and often with little regard for the rights of wider society’, say the Conservatives. A draft bill was promised in the last parliament, but never appeared.

Promising to ‘bring our British legal system back under British control’, Ukip believes its proposals on human rights are more workable than the Tories’ because they are predicated on pulling out of the EU. For Ukip this would also mean reversing the current opt-in to EU law and justice measures, including the European arrest warrant.

Nigel Farage’s party would introduce independent lay oversight of family courts to ‘ensure confidentiality does not prevent proper scrutiny’. People attending faith-based tribunals would also have to be told that they cannot be forced to attend and that rulings may not be legally binding.

In civil justice, Labour had already pledged to abolish the employment tribunal fees system, while the Greens promise to cut fees so ‘tribunals are accessible to the workers’.

On civil liberties, the Greens support ‘a world of open, freely flowing information’ and want to establish a comprehensive Digital Bill of Rights.

The party would oppose any case for secret unaccountable mass surveillance ‘of the type exposed by Edward Snowden’. It accepts that government law enforcement agencies may occasionally need to intercept communications in specific circumstances, but says such surveillance should be within the rule of law and have independent judicial approval.

Unsurprisingly, the Conservatives are more hawkish. New communications data legislation will ‘strengthen’ the ability of the authorities to disrupt terrorist plots, criminal networks and child-grooming gangs.

‘We will maintain the ability of the authorities to intercept the content of suspects’ communications, while continuing to strengthen oversight of the use of these powers,’ the Tories add.

So-called ‘Extremism Disruption Orders’ will allow the security services new powers to prevent those seeking to radicalise others from using the internet or communicating through social media.