Queen Mary University of London has been beaten only by Oxford and Cambridge while other Russell Group universities have tumbled in the latest guide to the best places to study law in the UK.

The East London-based university came third in the this year’s Guardian University Guide 2018.

London South Bank University, Ulster and Edinburgh Napier enter the top 20 having missed out last year, while Russell Group members Birmingham and Warwick, traditionally thought to be in the elite club of UK universities, have dropped out.

'The quality of research that academics at Russell Group universities undertake is not measured in this ranking but has real benefits for students, who have the chance to learn from world-leading experts in their fields.' 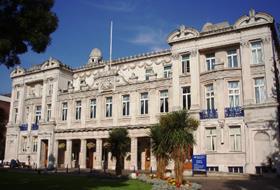 Professor Valsamis Mitsilegas, head of the Department of Law at QMUL, said he was 'delighted' with its performance.

'It confirms our position as a leading UK law school, and we’re thrilled to be number one in London. This comes in a year when we improved our position in the QS rankings, in which Law at QMUL is now placed in the top 40 globally.

'While rankings aren’t everything, this news is a welcome boost and underlines the fact that we’re heading in the right direction for our students. We put our students at the heart of our efforts – this means this means combining an academically rigorous degree with a focus on skills and employability.’

Despite the good news for QMUL, this year’s list was less favourable for London’s traditional top institutions.

London School of Economics retained its place in the top five but University College London and King's College London have both dropped places. UCL slips from fifth to tenth while King's is placed eleventh, down from fourth.

The annual list ranks universities, and the various subject departments, on criteria including teaching, feedback and the career progression of former students.

The Guardian list of the top 20 universities compared with their 2017 position is below.