Six months too long to finalise a divorce, bar warns

Making separating couples wait six months before their divorce is finalised is an 'unacceptable delay' for those who do not have children, the bar's representative body has told the government. 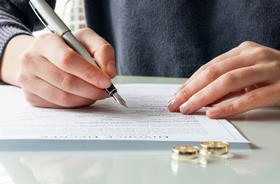 Divorce: six months too long for a decree absolute?

The Ministry of Justice, which has just finished a consultation on reforming divorce, wants to test a minimum six-month wait to grant a decree absolute after the decree nisi has been granted. The ministry says: 'We think this allows a sufficient period for most couples to consider the implications of divorce and reach agreement on practical arrangements, while not being so long a period of uncertainty that it would have a long-term effect on children.'

However, the Bar Council, in its consultation response, questions the need to extend the minimum period, which is currently six weeks and one day.

The bar says six months would be too long for couples who do not have children or who have straightforward financial affairs: 'It is not clear whether there is empirical or anecdotal evidence that the current period of 6 weeks and 1 day is too short a period of time and what the reasoning is for extending it to 6 months. The period is a minimum and a decree absolute will not be made until the court is satisfied that to make a decree absolute will not cause hardship and, in the case of a marriage with dependant children, that satisfactory arrangements have been made for the children.'

The bar says the proposal 'may not give sufficient weight to the serious consideration that spouses give to petitioning for divorce at the outset rather than in the period between nisi and absolute decrees'.

Elsewhere, the bar says the government's proposal to get rid of the requirement for a divorcing spouse to evidence one or more of five facts will address an inconsistency between marriages and civil partnerships.

The ministry's consultation closed on Monday amid widespread calls for reform. The Law Society has told the government it should restore legal aid so that separating couples can receive early advice.