The row over judicial independence continued to escalate this morning after a febrile weekend in which it embroiled both lord chancellor Liz Truss and prime minister Theresa May.

In a statement, the Law Society called on government ministers to be 'unequivocal' in their support for the rule of law, and voiced alarm at a 'dangerous and damaging' tendency to conflate the jobs lawyers do with the causes related to their work.

Former attorney general Dominic Grieve, meanwhile, condemned the 'weakest of statements' from Truss in support of the judges, which he said was 'unacceptable' for a Conservative government 'rooted in traditions of respect for the rule of law and parlaimentary democracy'.

On Friday Truss came under intense pressure to speak out from lawyers infuriated by her silence in the wake of incendiary attacks in the pro-Brexit press on the lord chief justice, master of the rolls and Sales LJ. They were dubbed ‘Enemies of the People’ on the Mail’s front page. 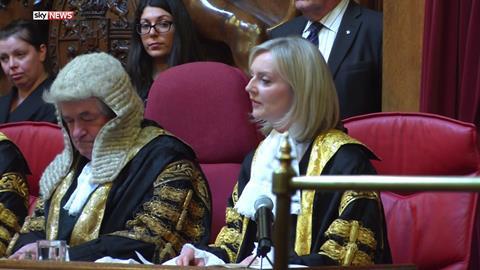 Truss broke her silence on Saturday after the Bar Council passed a resolution calling on the lord chancellor to condemn the attacks.

The resolution read: ‘The Bar Council of England and Wales condemns the serious and unjustified attacks on the judiciary arising out of the Article 50 litigation. It regrets the lack of public statement by the lord chancellor condemning these attacks and calls upon the lord chancellor to do so as a matter of urgency. A strong independent judiciary is essential to a functioning democracy and to upholding the rule of law.’

Other critics were more outspoken. On Twitter, PJ Kirby QC of commercial set Hardwicke accused Truss of ‘failing to honour her oath or perform her statutory duties’.

’In relation to the case heard in the High Court the government has made it clear it will appeal to the Supreme Court. Legal process must be followed.’

Truss’s statement was condemned as 'too little, too late’ by shadow justice secretary Richard Burgon and it did not placate all her lawyer critics. The Criminal Bar Association described it as ‘wholly inadequate and confused’.

Former attorney general Dominic Grieve is also highly critical of Truss in an article for the New Statesman today. Describing the government's response to the 'vitriol' as 'troubling', he said: 'Irrespective of its own view on the decision of the court, it was its positive duty to support the judiciary in its work and the right of the applicants to obtain legal redress in the Queen’s courts.

'Yet one minister saw fit to criticise the applicants for bringing the claim at all, at a time when they were being subjected to death threats and the lord chancellor took 48 hours to issue the weakest of statements in support of judicial independence in the face of a wholly unjustified attack.'

He added: 'For a Conservative government that states it is rooted in traditions of respect for the rule of law and parliamentary democracy, this is not an acceptable position to adopt and is disappointing to many of us who give it our support. It reinforces the view that politicians act without principles and this is precisely what has already caused so much damage to the standing of our political institutions.'

The lord chancellor had also issued another statement on Saturday night defending LCJ Lord Thomas, after former UKIP leader Nigel Farage said Thomas should have recused himself from the case over his links with the European Law Institute. Truss described Lord Thomas as a ‘man of great integrity and impartiality’, adding: ‘Like all judges, he has sworn an oath to administer the law without fear or favour, affection or ill will.’

The prime minister, meanwhile, defended the right of the judges to issue their ruling but failed to condemn the press attacks. She told reporters: ‘I believe in and value the independence of our judiciary; I also value the freedom of our press. These both underpin our democracy.’

The Bar Council has said this morning it will write to the lord chancellor and is keeping the situation under review. The CBA, meanwhile, has again taken aim at the government for not doing enough. In a letter to its 4,000 members, chair Francis FitzGibbon QC says: 'Neither the Lord Chancellor nor the Prime Minister have done what they ought to do, and unreservedly condemn both the calling of judges ‘enemies of the people’, the demands for their dismissal, and the making of their blameless personal lives into objects of reproach.

'Standing by and saying nothing may not be meant as such, but is likely to be seen as tacit approval for what has gone on, and encouragement for more of the same. In these disturbed times, dignified silence doesn’t work because there are too many people who will see it as a green light.'

'I’m sure they would accept they are unlikely to decide so without criticism. But the principles [of the rule of law] remain critical in cases as big and fundamental as this one.

'I can and do defend those principles at the same time that I disagree respectfully with the court. But the good news is that there’s a mechanism to allow those who disagree. It’s called an appeal and we will make use of that mechanism.'

'Attacks on the judges simply because they were doing their jobs does our country no credit and government ministers must be unequivocal in their support for the rule of law even if they disagree with the judgment.

'It is part of the role of lawyers to defend unpopular causes and there has been an increasing narrative in recent months that seeks to conflate the jobs solicitors and barristers do with the causes they represent as part of our system of justice. The extension of this to disparaging and criticising judges is dangerous and damaging.

'This very narrative is undermining to a system which has evolved over many centuries and which helps ensure that power is not abused and that - where there are legal matters to be decided - citizens have recourse through the courts.'

'The vote on 23 June threw up an unprecedented set of challenges - but it decided just one thing: that Britain would leave the EU. We are fortunate in this country to have a set of institutions which provide clarity and resolution of issues triggered by that referendum.

'This includes next month's Supreme Court hearing on Article 50 which we hope will be greeted - whichever way it goes - with a much less inflammatory reaction."

The Daily Mail remains on the offensive this morning, interpreting the prime minister’s comments as backing the press and accusing the ‘liberal elite’ of ‘pompous humbug’ in its leader column.

The leader describes the judiciary as a ‘virtual closed shop’, with Supreme Court judges ‘largely selected by their peers’.

It adds: ‘Calls for public hearings to gauge candidates’ views and any political leanings – as happens in the US – have been resisted. Isn’t it time for a change?

’Surely if judges have allegiances which may affect their decisions, the public has a right to know.’

UKIP’s Evans, meanwhile, accused the High Court of overriding  the ’will of the British people’ by ruling there must be a vote in parliament.

She told BBC Radio 4’s Today programme: ’I think there is a debate to be had about whether or not judges should be subject to some kind of democratic control.’

Evans said she was ’not saying we should get rid of judges’ but was ‘questioning the legitimacy of this particular case’.

Evans’ comments were branded ’irresponsible’ by Labour’s shadow Brexit secretary Keir Starmer, former director of public prosecutions. He said: ’Some of us have worked in countries where judges do as governments tell them and we know that is highly corrosive of the rule of law and democracy.’

Nigel Farage, meanwhile, said he intends to lead a '100,000-strong' march on the Supreme Court on the first day of the government's appeal, expected to be 5 December.