Solicitor advocate and director at Switalskis Solicitors Ranjit Uppal has been appointed as a district judge in the north eastern circuit, based at Doncaster County Court. 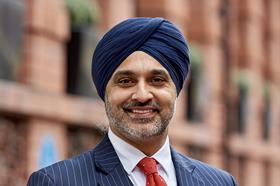 Uppal has specialised in family, child care and immigration law throughout his career. He trained with Parker Bird Solicitors before becoming a partner at the firm in 2000. Following the merger of Parker Bird and Switalskis Solicitors in 2012, Uppal was made head of the child care law department.

Uppal was the first Sikh solicitor in Huddersfield when he qualified in 1997. In 2006, he was appointed as the youngest and first Asian president of the Huddersfield Law Society in its 126-year history, when he was 33.

He travelled to Uganda as part of the Huddersfield Law Society’s Twinning Group and later on behalf of Role UK, which supports long-term partnerships between the UK legal sector and legal actors in developing countries. The Ghanaian government also enlisted his support in 2019 to provide advice on developing the country’s childcare system, facilitated by UK-based group Strengthening Families for Abandoned Children (SFAC).

Whilst working as director and solicitor advocate in Switalskis’ family and care team, Uppal served as a part time district judge. He was named Solicitor Advocate of the Year at the Law Society Excellence Awards 2016.

Uppal commented: 'I have thoroughly enjoyed my time at Switalskis and recognise that the opportunities that my role here have presented have enabled me to develop into the district judge role.'

Switalskis managing director John Durkan added: 'It’s with a very heavy heart that we prepare to say goodbye to Ranjit, but we completely understand his decision and all wish him the very best in this new role. The child care law department was one of only two in the firm when it was founded by Stephen Switalski in 1993. It will remain key to our business and we’re delighted that Ruth Coneron will now lead the team and continue to develop it as an area of real strength and expertise.'

Uppal will take up his new role from 30 November.