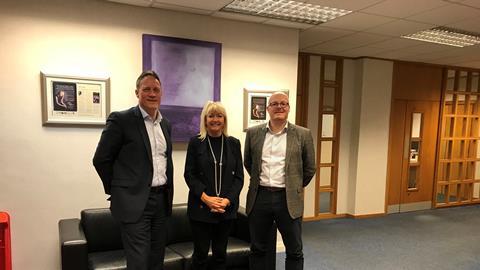 Kain Knight, the UK’s longest established independent firm of costs lawyers, has marked the opening of its new Manchester office in Spinningfields with hires and new client gains.

Joining Kain Knight as Commercial Director is Mark Hartigan. Hartigan spent ten years as a director of Just Costs Solicitors before leaving the business last year. At Kain Knight he teams up with former colleague and costs lawyer Nick McDonnell who joined as a director last year and heads up the Manchester office. McDonnell was previously technical director at Just Costs Solicitors.

Commenting on his appointment, Mark Hartigan said: ’Kain Knight is an ever-growing force in the field of costs litigation. As the longest established independent firm of costs lawyers in the UK, it has an extensive client base which includes many of the leading names in the legal world. The opening of a new office in Manchester brings a new dimension to the business and I am looking forward to further developing our client base in the commercial, insurance and personal injury practice areas.’

Hilary Meredith, chair of Hilary Meredith Solicitors Ltd said: ’We are looking forward to a long-term partnership with Kain Knight. I’ve known Mark for a long time. He knows the costs market inside out and always delivers.’

Matthew Kain, managing director at Kain Knight said: ’We are delighted to welcome Mark to the business. He has an outstanding track record in the legal sector with wide-ranging connections throughout the market. Our new partnership with Hilary Meredith Solicitors is an example of the high calibre clients he is already bringing to the business.’