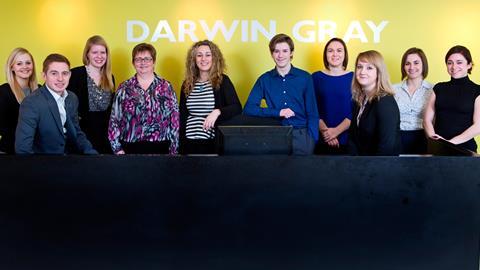 Catherine Burke, who joined Darwin Gray in 2007, has been promoted to senior associate. She specialises in commercial property, particularly development, investment sales and purchases and commercial leases.

Employment lawyer Owen John joined Darwin Gray in 2008 as a trainee and has been promoted to associate. Owen is a fluent Welsh speaker from Cardiff whose expertise lies in employment areas including unfair dismissal and discrimination claims, contracts and TUPE transfers. He also advises on various aspects of sports law and is registered with the Football Association of Wales to act as a football agent in the UK and abroad.

Rachel Ford Evans and Siobhan Williams have been recruited as trainee solicitors and Ceris Clift joins the firm as a paralegal.

There have also been two promotions within the commercial dispute resolution team. Tegen Quinn, who joined Darwin Gray in 2007, has been promoted to associate. She has the experience and expertise to advise on contentious and non-contentious commercial matters. Kate Andrews, from Newport, joined Darwin Gray as a trainee three years ago and qualified last year. She specialises in property litigation and contentious probate and is secretary of the South Wales branch of the Association of Women in Property.

Danielle Boucher has been promoted to HR assistant and is due to complete a CIPD course at Cardiff and Vale College in May.

Ashley Coleman joined Darwin Gray on a placement from ACT Training’s Pre-Apprenticeship Academy. He has since been named ACT’s Traineeship Learner of the Year at the National Training Federation Wales Apprenticeship Awards Cymru 2014.

These follow the arrival of property litigation and social housing specialist Neil Morgan who joined the firm as a partner from Hugh James in June 2014.

Donald Gray, partner at Darwin Gray LLP, said: ‘We have experienced substantial growth within the last few years and have a first-class reputation for the service we provide to our clients within the commercial marketplace.

‘These key promotions and appointments consolidate our highly regarded team of lawyers and enable us to continue servicing our clients’ legal requirements in all respects.’