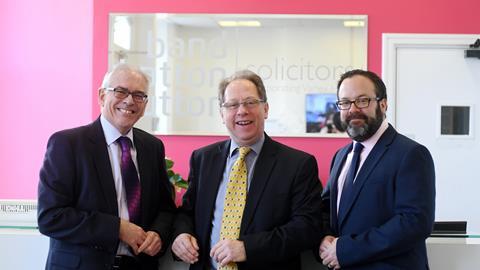 A new era is being heralded in at a Coventry law firm which is celebrating five years since it was formed in April 2013 after Band Hatton, Button Legal and Varley Hibbs, joined.

Since first launching, the firm has grown from 62 staff members to 85 and there are plans to increase the team further in the future.

Nick Button, senior partner at Band Hatton Button, is looking forward to taking on the challenge of the senior partner role and to continuing to build on the firm’s success. He said: 'We merged five years ago to become a strong, stand-out force in Coventry and that is something that we very much feel we have achieved over the past five years.’

'I would like to take this opportunity to thank Phil for all his hard work and dedication over the past five years as senior partner, he has been a huge asset to the firm.

'I am looking forward to taking over from Phil and making sure that Band Hatton Button continues to flourish over the years to come. I would also like to congratulate Daniel on his new role and wish him the very best of luck leading our Commercial Property team.'