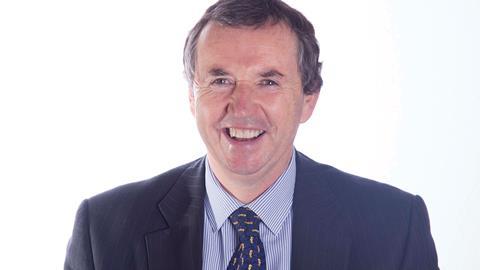 What pushed me towards a legal career was a school careers evening. A local solicitor did a tremendous sales pitch. My legal training was good preparation. Articles in those days were less academic. We did everything: reception, accounts, switchboard, archiving and the post, as well as practical law. It was great training for what makes a business tick.

When I joined the firm, we were a relatively small north Essex firm with offices in Halstead and Colchester. The legal profession was run by the Law Society, with high ethical and professional standards, and was largely protected from external competition. Over the years, those barriers and protections have been dismantled. As well as external regulators, we now have a significantly greater compliance burden. There is also external competition both from new business entrants and international competitors.

Successive governments have made changes to the marketplace at the altar of innovation and the consumer, leading to major changes in professional and client behaviour. An example would be conditional fee agreements, which the profession counselled against.

We have always tried to evolve at Birkett Long. I joined the firm in 1979, qualified in 1981 and became a partner in 1984. In those days, we ran the firm through monthly partners’ meetings as there were only eight partners. In 1995, we formed our first management board to run the business. I was a member, became chairman in 2005 and then managing partner in 2010. We are now an ABS, have non-lawyer partners in finance, HR and business development, and subsidiary businesses in financial advice, HR and intellectual property. We are now an Essex and London firm.

The highlight of my career has been the growth of Birkett Long. Along with so many others, I take great pride in the part I have played. We have such a fantastic and professional team. Additionally, we have a strong community ethos at the firm which I encourage. Solicitors are still greatly respected by the public in our local communities.

I have been fortunate over the years to have been involved in forming and chairing a number of local charities with health, education or neighbourhood objectives. A highlight for me is the St Benedict’s Foundation, which I formed and chaired for 25 years, and which supports our local Catholic secondary school. We raised nearly £1.3m and built a sports hall, a geography block and a library, and extended the school hall. I was also fortunate to have served as both chairman of governors at St Benedict’s College and as captain of Colchester Golf Club where I am now a trustee.

I have been fortunate to be involved in many interesting litigation cases and trials. I took a case to the House of Lords where we successfully changed the law on limitation. And I took another to the Court of Appeal where we overturned the Inland Revenue guidance on inheritance tax in property companies.

I have also appeared as an advocate across London and the eastern region in the High, county and magistrates’ courts. A particular highlight was acting for a guardian ad litem in the largest care case ever run in the Family Division. It lasted four months, with eight represented parties and over one hundred witnesses. Cross-examining a witness before a High Court judge with a number of QCs watching gets the adrenaline pumping.

I became an accredited mediator in 1991 and was involved in over a hundred mediations. I have also been a deputy district judge since 1994. A particular highlight has been sitting in courts in the Royal Courts of Justice. The majesty of the building never ceases to inspire.

I remain with the firm to run three innovation projects. I will continue to sit as a deputy district judge and help with a number of small charities I still chair.

I wouldn’t dream of giving advice to other law firms to future-proof their practices when I see so many talented and able people in our profession. Just enjoy every moment – and be bold!