A&O 'in merger talks' with US firm

Magic Circle firm Allen & Overy is understood to be in merger talks with US outfit O’Melveny & Myers. A combination of the duo would create a transatlantic giant with 3,000 lawyers and revenues of £2bn.

Legal Week, which broke the news on Friday evening, said details of the talks have been contained with a small group of senior figures, although A&O is said to have told partners in January that the Magic Circle firm was in talks with several US firms about a merger.

In a statement, A&O said: ’While we have said for several years that we are open to considering a merger with the right partner in the US, we talk to many law firms in many countries all the time and we do not comment on market speculation and rumours regarding any particular firm.’ 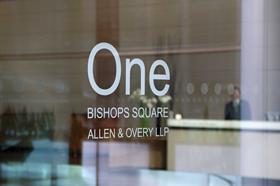 Over the past decade several US firms have entered the London market through mergers, or used a merger to scale up, according to research by Møller PSF Group. There have also been transatlantic ‘mergers of equals’, including between Norton Rose and US firm Fulbright & Jaworski in 2012; Dentons with Atlanta-based law firm McKenna Long & Aldridge in 2015; and Eversheds with US firm Sutherland Asbill & Brennan last year.

Los-Angeles-headquartered O’Melveny has over 700 lawyers in 15 offices worldwide, including a London office at Paternoster Square in the City.