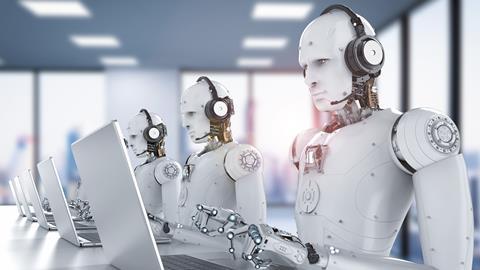 Law’s 30-year employment boom could go into sharp reverse over the next decade, according to a study commissioned by the Law Society of England and Wales. But lawyers are unlikely to be the main casualties - legal secretaries and support staff are set to bear the brunt of any contraction.

These are among the ‘scenarios’ envisaged in a study on strategic workforce planning commissioned by Chancery Lane from the Institute for Employment Studies and published today. Using employment data from 2017, the report analyses how the market will need to adapt to a more deregulated environment, tougher commercial pressures and increasing adoption of technology in the years to 2027.

Overall, the report predicts a fall in employment of 13,000 (4%) on the 321,000 employed in the law in 2017. The number of legal professionals and associates is projected to continue rising, by around 2% a year. But the number of legal secretaries - a role headed for extinction - will slump by two-thirds, while the numbers of other office support staff will fall by a quarter.

In 1998 one secretary, on average, was employed for every two legal professionals. By 2027 it is predicted there will be one for every 20.

Since 1993, the number of legal professionals has risen at just under 2% a year, from 61,000 to 150,000. But the future appears bleaker under an alternative forecast based on high takeup of technology, in particular artificial intelligence. That would cost a further 22,000 jobs, a net reduction in total employment of 35,000 jobs - more than one in 10 of the current total.

The legal professional category would also suffer attrition under this 'extreme AI' scenario, with 7,000 fewer workers. But most of the roles to go would be secretarial and support staff in larger firms, which are more likely to deploy artificial intelligence.

The report also considers the impact of different Brexit scenarios, though the institute said it would be 'very difficult or impossible' to model a cumulative total reflecting both Brexit and high adoption of technology. Under a World Trade Organization-type Brexit trade relationship, a further 3.5% reduction in cut in total employment is predicted on the central forecast.

Another theme of the report is the changing skill set demanded by employers, based on interviews with private practice firms, in-house legal teams and individual solicitors.  Communication and team-working are increasingly viewed as important, in addition to technical skills. The most prevalent skills gaps identified concerned problem-solving, client-handling, and planning and organisation.