Human rights activists have urged the international community to step in after a campaigning Iranian lawyer had her prison sentence significantly increased.

Women’s rights advocate Nasrin Sotoudeh faces a total of 38 years and 148 lashes – the harshest documented sentence for a lawyer in Iran in recent years.

Sotoudeh, who represents women who have protested about wearing the headscarf, denies national security-related charges made against her. 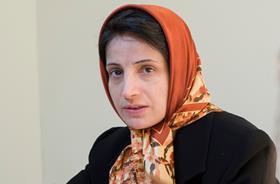 The charity reports that Sotoudeh was recently informed by the office for the implementation of sentences in Tehran’s Evin prison, where she is jailed, that she had been convicted on seven charges and sentenced to 33 years in prison and 148 lashes. This is in addition to a five-year sentence handed down in 2016. The charges, connected with her human rights work, include ‘inciting corruption and prostitution’, ‘openly committing a sinful act by … appearing in public without a hijab’ and ‘disrupting public order’.

Amnesty says the judge, Mohammad Moghiseh, applied the maximum statutory sentence for each of her seven charges and then added another four years to her total prison term, raising it from the statutory maximum of 29 to 33 years.

Philip Luther, Amnesty’s Middle East and North Africa research and advocacy director, said Sotoudeh should be released immediately and unconditionally, and her sentence quashed. ‘Nasrin Sotoudeh has dedicated her life to defending women’s rights and speaking out against the death penalty - it is utterly outrageous that Iran’s authorities are punishing her for her human rights work,’ he said.

‘Governments with influence over Iran should use their power to push for Nasrin Sotoudeh’s release. The international community, notably the European Union, which has an ongoing dialogue with Iran, must take a strong public stand against this disgraceful conviction and urgently intervene to ensure that she is released immediately and unconditionally.’

Last year the New York-based Center for Human Rights in Iran (CHRI) said the country had violated domestic laws and international obligations, following news that at least three lawyers had been charged and four others blocked from retaining clients .