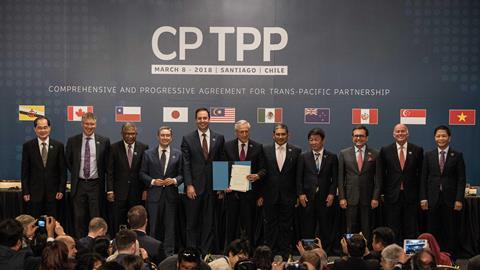 The UK trade agreement with Australia – which promises to liberalise legal services – could act as a stepping stone to an 11-country bloc with special provisions to accommodate foreign lawyers, the Gazette understands.

Importantly for lawyers, the trans-Pacific agreement has a professional services annex with clauses designed to facilitate the provision of cross-border legal services. While regulators are not bound by the annex, it is expected to address some of the behind-border barriers that currently prevent UK solicitors practising abroad. Specifically, it encourages member countries to allow foreign lawyers to operate on a fly-in, fly-out basis and be integrated fully with domestic lawyers.

Law Society president I. Stephanie Boyce said: ‘Entry to the CPTPP will provide important benefits for the UK services sector given the number of UK businesses that provide services in the Asia-Pacific region, including law firms, financial institutions and consultancies.’

The UK is the first non-signatory to seek accession to the CPTPP so there is no precedent for how long negotiations will last. However, it is believed that the free trade agreement with Australia could aid the UK’s accession.

The Department for International Trade announced an in-principle agreement with Australia last month. The pact confirms and clarifies the right of UK lawyers to practise under their UK title in Australia, and vice versa. It also opens up opportunities for junior lawyers under the youth mobility scheme, which will be available to nationals aged 35 or under for a total stay of up to three years. The requirement to undertake specified regional work – for example, on a farm – will be removed.

The Law Society is now lobbying for a forum for regulatory dialogue between UK and Australian bodies to tackle specific domestic barriers which could impede cross-border practice.

The government is keen to promote UK legal services post-Brexit. Last week, it held a virtual conference with Middle Eastern nations to showcase the strength of UK lawyers. Meanwhile, it said that barriers preventing UK lawyers from practising in India could be removed under an enhanced trade partnership. Foreign lawyers are not currently permitted to practise in India and there is no requalification system for foreign lawyers.