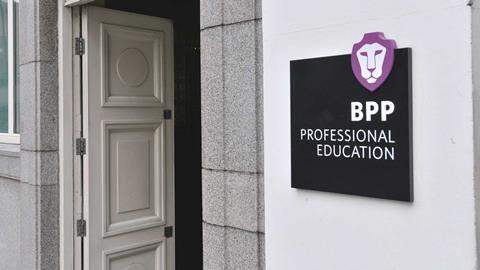 Legal educator BPP has devised a cheaper way to train lawyers following the introduction of the Solicitors Qualifying Exam (SQE) – but its new courses could still cost graduates over £20,000.

BPP said discounts and postgraduate funding are available when multiple courses are bought together, and online programmes are also available.

However, BPP’s fees do not include the costs of the assessments themselves: £3,980 payable to the regulator.

BPP’s main rival, the University of Law, published details of its courses in February. The university has developed an LLM Legal Practice course covering both elements of the SQE, for which it will charge between £12,000 and £16,500. Non-law graduates are also advised to complete a law conversion court before embarking on the LLM, which could cost up to £15,000. However, ULaw is also offering shorter, cheaper preparation courses costing as little as £500.

The SQE came into force on 1 September. Developed by the Solicitors Regulation Authority, the new route involves two years of qualifying work experience and two sets of assessments: SQE1 and SQE2.

The wide variety of training options on offer has sparked concerns that students who take cheaper courses will be less highly regarded than those who complete expensive training programmes, creating a two-tier profession.