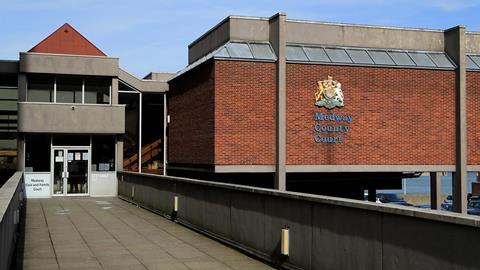 Court bosses plan to close the busiest family court in the south-east region next year after the landlord of the building decided to redevelop the site.

HM Courts & Tribunals Service will move operations out of Medway County and Family Court in Chatham and increase capacity at Maidstone Combined Court, located 11 miles away. The lease on the site is set to end in January 2021, and despite attempts to extend it, HMCTS said this had not been possible – neither has it been possible to find other suitable accommodation in the same town.

Work will increasingly also be heard by telephone or video where possible, a process which has been effectively tested during the coronavirus pandemic and is set to become a more permanent feature of the justice system in future.

Medway County Court has seven courtrooms and is the designated family court for Kent, operating, according to HMCTS, at a ‘high-level’ of utilisation. The building is also occupied by Cafcass, the Insolvency Service and the National Probation Service.

Donna Bolton, delivery director for HMCTS in the south east region, said the long-term plan, as set out last year, is to focus on main strategic centres and the major towns and cities with the best transport links.

‘We outlined that this would mean consolidating out buildings and investing further in those that remain, whilst ensuring that access to justice remains as our top priority,’ said Bolton.

‘Whilst there were no immediate plans to reduce our estate in Kent, circumstances outside our control has meant that we have to vacate the county building in Medway.’

The closure is subject to a four-week consultation starting today. The proposal is to spend between £8m and £12m building five additional courtrooms at Maidstone, whilst also moving some work out of Medway Magistrates’ Court to free up two courtrooms. According to the consultation document, Maidstone is a 23-minute drive from Chatham but takes at least an hour and 20 minutes to do the journey on public transport.

The ‘extensive’ works at Maidstone Combined Court will not be ready until late 2021, so in the meantime some civil and family work will move to Medway Magistrates’ Court and the remaining work allocated where there is capacity at Dartford, Canterbury, Thanet and Maidstone.