Charities will pay more to be notified of bequests because of the government's decision to cancel a contract, the Gazette can reveal. In an open letter to charities, HM Courts & Tribunals Service (HMCTS) said legacy notification service Smee & Ford will continue to alert charities to bequests for at least another year, despite the fact the government will terminate its contract at the end of this month.

HMCTS announced in February it would be ending its relationship with Smee & Ford. A spokesperson told the Gazette that the exclusive contract had been assessed as 'unlawful'. HMCTS would give no further details but said the decision was not a reflection on the service provided. The Gazette understands that the contract may run foul of the EU Open Data and PSI Directive, which states that public–private agreements involving public sector information should 'avoid exclusive arrangements'.

Susan Acland-Hood, HMCTS chief executive, said that charities will be charged more under the new arrangement because Smee & Ford will have pay a statutory fee for all wills and grants from August. The size of the price hike is yet to be disclosed but Smee & Ford said it had 'endeavoured to keep them as low as possible'. 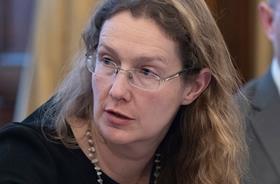 However, Acland-Hood said that the ‘service will be enhanced by the inclusion of a copy of the relevant will’. She added: 'We anticipate that this new arrangement will operate for at least the next 12 months, during which time we will continue to work with the charity sector and others to design longer-term arrangements to support legacy notification.'

The announcement was greeted with relief by some organisations after months of uncertainty.

Rob Cope, director of charity consortium Remember a Charity said: ‘The will writing environment is rapidly changing, which presents huge challenges and opportunities for good causes which rely on the public’s generosity. We look forward to continuing to work together with HMCTS to ensure that any longer-term arrangements will build on these foundations and better support the needs of smaller charities.’

Maria King, head of legacy professional partnerships at Cancer Research UK, added: 'Allowing charities to receive a soft copy of the will in question with each notification will help streamline legacy management. It will reduce the number of requests we need to put to solicitors or executors and will help us to earlier spot where our charity legacy expertise can add value, to help us work in partnership with them.'

A spokesperson for Smee & Ford said: 'We remain dedicated to continuing to provide a forum setting for charities to come together with us to discuss future improvements and how we can enable best practice with regards to legacy notifications.'