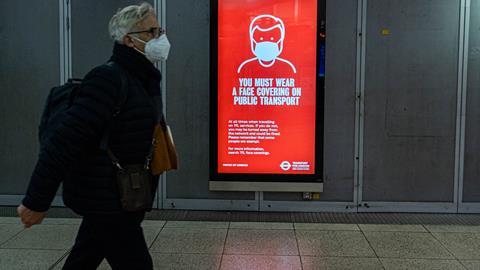 Courts to ‘continue as they have during pandemic’ - LCJ

The work of courts and tribunals ‘will continue as it has done over the course of the pandemic’ during the government’s ‘Plan B’ to tackle rising coronavirus cases, the lord chief justice has said.

Prime minister Boris Johnson said on Wednesday that people should work from home where possible from next week as part of new restrictions to tackle increased cases of the Omicron variant.

In a message published on Thursday afternoon, Lord Burnett and Sir Keith Lindblom, the senior president of tribunals, said: ‘The measures being introduced under Plan B mean that hearings should continue to take place in person alongside effective use of video hearings and remote attendance where that is in the interests of justice.

‘The coming weeks will bring their difficulties across all jurisdictions, both professionally and personally, but we have been there before and are equipped to cope.

‘We are grateful for the efforts of judges, tribunal members, magistrates, the legal profession, HMCTS and judicial office staff and all involved in the justice system over the last two years in support of the administration of justice and we are sure they will continue to do so.’

The message accords with what the Gazette was told yesterday: a Ministry of Justice spokesperson said a ‘top-down missive’ about a shift to remote or hybrid hearings was unlikely, while a spokesperson for the judiciary also said there was not likely to be any substantial change in the operation of the courts.

HM Courts & Tribunals Service’s weekly operational summary for court users is due to be published this afternoon.