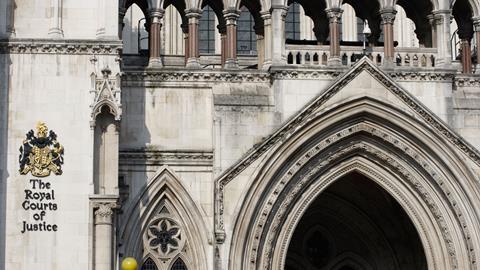 Dechert’s former head of white-collar crime Neil Gerrard is ‘nothing more than a bent copper [and] a disgrace to the solicitors’ profession’, the High Court heard today – a day after the retired solicitor was found to have leaked his client’s confidential information and ‘plainly lied’ on oath.

Gerrard, 67, and his former firm face claims from two Jordanian lawyers, Karam Al Sadeq and Jihad Quzmar, for alleged responsiblity for their unlawful abduction, detention and interrogation in Ras Al Khaimah (RAK), one of the states of the United Arab Emirates. The claims are ‘vehemently’ denied.

Dechert and Gerrard are also being sued by Al Sadeq’s lawyers Stokoe Partnership Solicitors for alleged involvement in hacking and data theft attacks, which are said to have occurred after the firm was instructed and which is denied ‘in the strongest possible terms’.

Stokoe’s case was also initially brought against two private investigators: Stuart Page, with whom the firm settled in January, and Patrick Grayson, who the court heard today has agreed to provide evidence against Dechert and Gerrard following the settlement of the claim against him.

The court heard that Dechert and Gerrard no longer oppose Stokoe’s case being tried alongside those of Al Sadeq and Quzmar – paving the way for a mammoth 13-week joint trial, as previously reported by the Gazette, which is likely to start next April.

John Brisby QC, representing Al Sadeq and Quzmar, referred to yesterday’s judgment in proceedings brought by Eurasian Natural Resources Corporation (ENRC), in which Gerrard was found to have deliberately leaked its confidential information to the press and the Serious Fraud Office.

Mr Justice Waksman said Gerrard was ‘a highly unreliable and at times dishonest witness’, adding: ‘His evidence was often inconsistent with the documents or implausible and, on more than one occasion, he was plainly lying.’

Brisby said that, at a previous hearing, he told the court that ‘if my clients’ allegations were substantiated at trial that Mr Gerrard was nothing more than a bent copper, or ex-copper, and a disgrace to the solicitors’ profession’. He added: ‘In the light of Mr Justice Waksman’s judgment, I repeat my earlier comments about Mr Gerrard.’

He also referred a statement issued by Dechert yesterday, which said Gerrard’s conduct was ‘completely at odds, not only with our values, ethos, and culture as a firm, but also with the high ethical and professional standards adhered to on a daily basis by our lawyers the world over’.

Brisby said: ‘It appears from reading that that Dechert either have thrown or are about to throw Mr Gerrard under the bus, to use a colloquial expression. They have also yesterday afternoon removed Mr Gerrard’s photograph and details from their website.’

Philip Edey QC, for Dechert and Gerrard, said in relation to yesterday’s judgment on ENRC’s claim that ‘it is irrelevant to the issues in the case and, more than that, we would say that any findings made are inadmissible in these proceedings’ due to the rule in Hollington v Hewthorn.

Brisby said in reply that there are exceptions to that rule, adding: ‘One thing is certain – I would be entitled … to cross-examine Mr Gerrard about the disgraceful factual matters that led to Mr Justice Waksman’s findings and I will do so.’