The designers of the new portal for low-value RTA claims have unveiled the website ahead of the proposed 6 April start date.

The Motor Insurers’ Bureau, which is tasked with setting up the system, announced the portal will be called Official Injury Claim. Claimant lawyers and insurers can now register to use the portal, as well as create accounts for web users and test integration to the service. 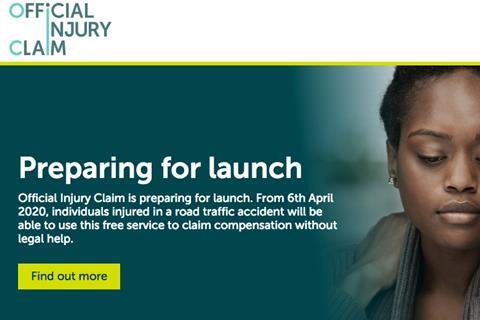 But the portal also promises to make the claim process ‘simple, secure and unbiased’ for those without representation to use. They will be guided through how to make a claim and receive settlement offers through the portal. The system will apply to RTA claims valued under £5,000 and is being brought in under the Civil Liability Act, which also sets a new tariff for damages.

Dominic Clayden, chief executive of the Motor Insurers’ Bureau said: ‘Today’s launch is a significant milestone for the successful delivery of the new service to support the whiplash reforms set by the Ministry of Justice. By opening up the registration window today we are able to give organisations the chance to choose a registration time that best suits them in the coming weeks. There is still much to do ahead of launch but from an MIB perspective, work on the build has gone well and overall delivery is in good shape.’

The MIB concluded the first phase of testing in November and has now started the second phase.

But while the MIB remains confident about its progress, the system still relies on a number of unresolved issues. These include the ADR service available solely for unrepresented claimants, the civil procedure rules governing how the portal works, and the integration with other elements of the claim process such as credit hire and rehabilitation.

Last week, the Forum of Insurance Lawyers warned time was running out if the MoJ wanted to keep to its 6 April deadline.

Immediate past-president James Heath said: ‘Launch is now just over the horizon and yet despite this we still have uncertainty over wide parts of the final programme. If we are going to launch in April, then the time has come for clarity and indeed visibility over the final process, rules and portal service.

‘Without this, neither claimant representatives nor compensators can make the key decisions required to make operational changes necessary for the new regime.’