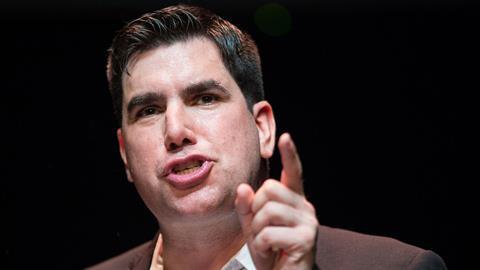 Shadow justice secretary Richard Burgon (pictured) said the party would scrap the fees introduced in 2013 which have been blamed for a 70% fall in employment claims.

It is understood that the pledge – expected to cost between £15m and £20m a year – has been approved by the shadow treasury and will be in any future Labour manifesto.

Earlier this week Burgon, a former employment solicitor with trade union firm Thompsons, said the introduction of fees made him ‘sick to my stomach’.

The party went even further last night, when Burgon told a fringe meeting at the annual conference in Liverpool that Labour would increase funding to the legal aid budget, though he did not give exact figures.

It is understood that Jeremy Corbyn, whose leadership re-election was backed by Burgon, is sympathetic to the argument that legal aid funding should increase.

The shadow justice secretary said: ‘Queues are snaking out of the door of MPs’ surgeries from people who don’t need to see their MP, they need to see a lawyer.

‘Everything that will run through our approach will be about returning to the vision of the [Clement] Attlee government, which placed legal aid as one of the four pillars of the welfare state. We have to avoid attempts to degrade legal aid and recipients of legal aid.

‘Of course we would put more money in the legal aid budget to give it the respect and finance it deserves.’

Earlier in the conference, Lord Bach, who is leading the Labour commission to put together the party’s justice policies, said legal aid funding should be made available for inquests.

Bach said spending commitments more generally were still to be discussed with shadow chancellor John McDonnell but for inquests discretion should be employed. He added: ‘Of course [inquests] should be funded and not means tested.’

Earlier this month the chief coroner called for bereaved families to be given exceptional funding for legal representation in cases where the state has agreed to provide separate representation for one or more interested parties.