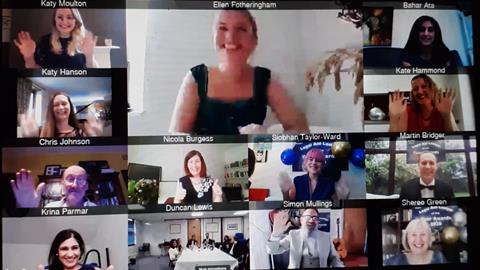 Unsung heroes within the legal aid community have been honoured for their work in a landmark virtual ceremony.

The winners of the Legal Aid Lawyer of the Year awards were announced in a ceremony live-streamed on their YouTube channel last night. Organised by the Legal Aid Practitioners Group, the awards, now in its 18th year, are normally handed out at a glittering ceremony in London.

Legal aid team: Joint Council for the Welfare of Immigrants

Family winner Kate Hammond told the event that remote hearings had been challenging for clients during lockdown, noting difficulties hearing or seeing people, and the WiFi going down. ‘It makes access to justice quite tricky,’ she said.

Criminal defence winner Philippa Southwell is the head of the human trafficking and modern slavery department at Birds Solicitors. Asked about the Modern Slavery Act, which was introduced in 2015, she said she still gets cases referred to her on a daily basis where ‘things have gone wrong for the most vulnerable people in our communities’.

Accepting the award for legal aid firm/not-for-profit, Patrick Marples, chief executive of South West London Law Centres, said staff were seeing many more enquiries and the demographic of people was changing. ‘We’re worried some of the most vulnerable people are not contacting us anymore. In the coming months we need to try and get engaged with that cohort again,’ he said.

Social welfare winner Simon Mullings said the work legal aid lawyers do is an ‘absolute privilege’. He said: ‘Vulnerable people at difficult times in their life are coming to see us and put their trust in us.’

Nicola Burgess, legal director of the Joint Council for the Welfare of Immigrants, which won legal aid team, said she was proud of her colleagues. ‘We listen. We take time. We develop a rapport. It’s not just about taking instructions. We’re building relationships with each and every client. I speak to some of our clients more than I speak to some family members.’

The award for outstanding achievement, for which there was no shortlist, was given to Mike McIlvaney, a co-founder of The Community Law Partnership in Birmingham.

McIlvaney said he had been a legal aid lawyer for the best part of 30 years but one constant was the attack on legal aid. He said: ‘As the Black Lives Matter movement comes to the fore, we as legal aid lawyers know it’s our BAME communities who are disproportionately affected by funding refusals and funding cuts. Something has to change.’