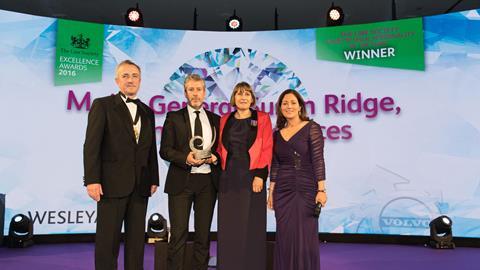 Major general Susan Ridge, the British Army’s highest-ranking woman ever, was among the winners at the 10th annual Law Society Excellence Awards.

She was named Law Society Gazette Legal Personality of the Year 2016 at last night’s ceremony, which was attended by hundreds of solicitors at the Hilton on London’s Park Lane.

As head of Army Legal Services, Ridge (pictured, second right) commands a team of more than 100 qualified solicitor and barrister army officers deployed in the UK or overseas conflict zones.

The daughter of a farmer, Maj Gen Ridge started her legal career with a firm in North Wales. Upon being invited to join the partnership, she decided to try a short four-year commission in the Army Legal Service before undertaking that commitment. Twenty-four years later, she has risen to the very top.

An Army representative said: 'To be recognised as among the top in the legal profession in this way is a real tribute to the hard work, dedication and skill that general Susan brings to her legal work, and to the wider Army; and everyone at Army Headquarters is extremely proud of all of her achievements.'

Read the Gazette's interview with the major general here.

The Woman Lawyer of the Year award went to Ruth Grant, a board member at Hogan Lovells. Grant is a former London managing partner and people development partner at the firm, and chairs its global diversity and inclusion committee.

In the firms category the Excellence in Client Service Award went to Cohen Davis Solicitors and the award for Excellence In-house to Spire Healthcare Group.

Congratulating the winners, the highly commended and the shortlisted candidates, Law Society president Robert Bourns (pictured left) said: ‘The competition for these awards is becoming ever more fierce and each winner should be particularly proud of their achievement in the face of so many outstanding nominees. The standard they set is an example to the whole solicitor profession.’

The Law Society of England and Wales: Excellence Awards 2016

AWARDS FOR FIRMS OR TEAMS

Excellence in Marketing and Communications

Excellence in Diversity and Inclusion

The Law Society Gazette Legal Personality of the Year

Solicitor Advocate of the Year

Junior Lawyer of the Year

Woman Lawyer of the Year

Solicitor of the Year – In-house

Solicitor of the Year – Private Practice

Human Rights Lawyer of the Year