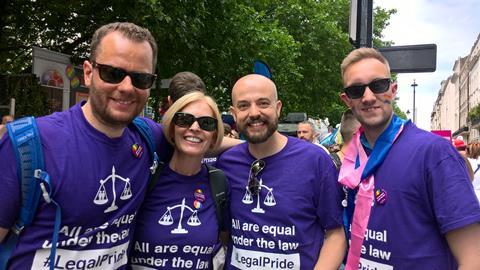 Fifty years since homosexuality was decriminalised in England and Wales, the Law Society was among hundreds of groups to march through central London to highlight the progress that has been achieved for lesbian, gay, bisexual and transgender people (LGBT) in the legal community.

The 100-strong legal profession parade, which included Society vice-president Christina Blacklaws, marched 1.4 miles under the banner 'All are equal under the law' on Saturday afternoon in the annual Pride in London parade, cheered on by thousands of LGBT supporters.

This summer marks the 50th anniversary of the Sexual Offences Act, which decriminalised homosexual acts in England and Wales.

Blacklaws said: 'London Pride is such an inspiring, invigorating and joyful occasion. I am incredibly proud to march as part of our diverse legal profession, celebrating that we are all equal under the law.

'Pride is also a vibrant reminder that many people around the world do not yet share our freedoms and so we march in solidarity with the global LGBT community.'

The Society's LGBT Lawyers Division was established in 2016 to support solicitors by sharing best practice, and addressing current issues and challenges in a supportive environment.