Multi-hander cases, involving three or more defendants, accounted for almost a fifth of all trials waiting to be heard last month. The number built up during the pandemic as they have been harder to hear with social distancing measures in place. 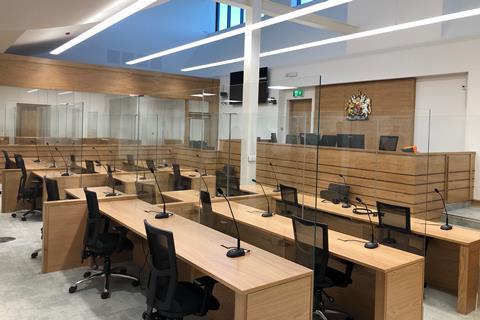 Loughborough’s supercourt is the second of its kind following another in Manchester which opened its doors in September. The facility will make use of HM Courts & Tribunals Service’s rapid rollout of remote technology since the pandemic hit. For example, vulnerable witnesses and victims will be able to give evidence from outside the courtroom.

HMCTS said the new court will free up capacity elsewhere in the system, allowing for up to an extra 250 cases a year to be heard across England and Wales.

However Law Society president I. Stephanie Boyce said the backlog in the criminal courts would not be cleared quickly. 'This is a long-term problem which pre-dates the pandemic and was the result of years of underfunding and cuts. As the lord chancellor recognises, it won’t be solved overnight,' she said.

'The investment announced in the budget was a step in the right direction and we hope the government response to the Independent Review of Criminal Legal Aid will result in further much-needed funding.'