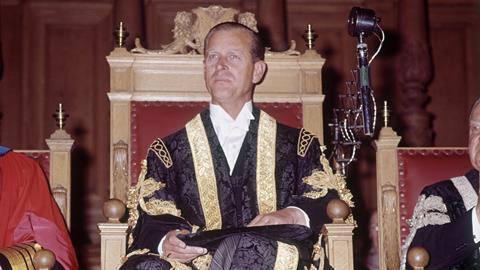 Senior members of the legal profession have joined the national and international tributes to the Duke of Edinburgh, whose death at the age of 99 was announced by Buckingham Palace at noon today.

Lord chancellor Robert Buckland said: 'HRH The Prince Philip, Duke of Edinburgh will be remembered with deep gratitude for his service in the Royal Navy, his tireless support to HM The Queen and his strong advocacy for environmental and technological causes. He was the very epitome of public service.'

On behalf of the solicitor profession, Law Society president I. Stephanie Boyce said: 'Our condolences and thoughts are with Her Majesty the Queen and the Royal Family following the death of Prince Philip, the Duke of Edinburgh.' The Bar Council said: 'We express our deepest sympathies to the Queen and the wider Royal Family following the news of the passing of the Duke of Edinburgh.'

In a statement, the lord chief justice said: 'Today we have entered a period of national mourning. I am sure you will have seen and heard the news of the death of His Royal Highness the Duke of Edinburgh. His death is a moment of sadness for our nation and I know that you will all join me in expressing our condolences to Her Majesty the Queen and the whole of the Royal Family.

'His Royal Highness dedicated more than seven decades to public service in the United Kingdom and the Commonwealth, both through his service in the Royal Navy and his unwavering support to Her Majesty during her long reign. A period of national mourning has begun. An online book of condolence will be available in due course.'

The Supreme Court said: 'Following the announcement of the death of HRH The Prince Philip, Duke of Edinbugh, the justices and staff of the Supreme Court of the United Kingdom and Judicial Committee of the Privy Council extend their sympathies to the Royal Family.'

Justice minister Lord Wolfson said: 'A lifetime of selfless duty and of dedicated public service. In the words of my tradition: his memory is a blessing, and may Her Majesty The Queen and the Royal Family enjoy a long life free from further sorrow.'

Inner Temple tweeted that the inn mourned the loss of Prince Philip, who was a Royal bencher.

The Magistrates Association said: ‘We are very sorry to learn the news that HRH Price Philip has passed away after a long life of public service. He will be greatly missed by the many organisations he supported. Our condolences and thoughts are with the Queen and with Prince Philip’s family.’

Prince Philip accompanied the Queen on her visit to the Law Society's Hall in Chancery Lane in 1968.

Pictured above: Prince Philip in the robes of Doctor of Law at Edinburgh University, 1962