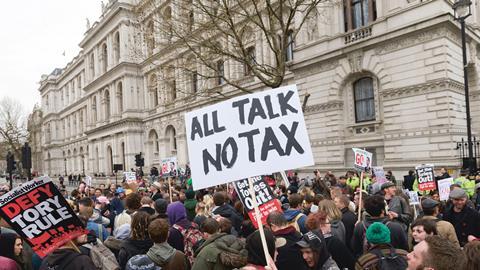 A new clampdown on tax avoidance could target advisers, but critics warn that the proposals go too far and may end up capturing traditionally accepted tax planning. Michael Cross reports.

The report stage of the Finance Bill, putting into effect measures announced in the budget, kicks off the new parliamentary season today. It will also ring alarm bells for those concerned by the government’s apparent enthusiasm for extending its tax-raising powers with little regard for the rule of law.

Last month, the Law Society noted that late amendments to the bill, introduced in its committee stage, could have the effect of raising taxes on buy-to-let property investments by treating proceeds of sales as income rather than capital gain. ‘By introducing a significant change in this way, the government is denying the public the chance to consider and comment on these proposals,’ chief executive Catherine Dixon said. ‘The way these changes were introduced, in particular without consultation on the draft legislation before it was added to the bill at such a late stage, starts to feel like legislation by stealth.’

Meanwhile, in a move that generated even more concern in the profession, the government published proposals for directly penalising lawyers and accountants who advise on tax avoidance schemes subsequently disallowed by HM Revenue & Customs (HMRC). Critics said the proposals could catch legitimate tax planning and raise the spectre of retrospective penalties against advice given in good faith. The Law Society said the plans ‘raise significant implications for solicitors working with tax law’.

The proposals, in a discussion document entitled Strengthening Tax Avoidance Sanctions and Deterrents, flesh out the budget announcement that the government would ‘explore options to introduce downsides for those who enable tax avoidance’. Ministers are understood to be frustrated that even when HMRC defeats schemes such as vehicles designed to exploit tax reliefs for film-makers, advisers to the schemes can still pocket their professional fees. Writing in the document’s foreword, Jane Ellison MP, financial secretary to the Treasury, states that those who provide the services that enable aggressive tax avoidance ‘should bear real risks and costs for their choices’.

The sentiment was widely welcomed. The Financial Times commented that ‘taking the battle to the supply side of the tax avoidance industry is sensible’. It noted that existing sanctions do little to deter the sale of ‘off-the-shelf schemes’, which are often ‘buttressed by a barrister’s opinion that can be shopped from a compliant QC’.

However the proposals for how the new regime will work prompted unease. The document proposes that a ‘starting point’ for penalties could be 100% of the benefit the adviser received. It also proposes ‘tax-geared’ penalties – that ‘enablers’ of schemes be fined according to the amount of tax they sought to avoid, in some cases 100% of the value. It notes that where an avoidance scheme is widely marketed, the aggregate amount of penalties for each enabler ‘could quickly become significant’.

Enablers are defined as ‘those who benefit financially from enabling others to implement tax avoidance arrangements’. This includes ‘accountants, lawyers and others who are intrinsic in, and necessary to, the machinery or implementation of, the avoidance.’ In this definition, the document proposes to adopt an approach already used to penalise enablers of offshore tax evasion, while promising ‘appropriate safeguards’ to exclude unwitting parties. Other safeguards would apply to employees of a promoter, unless they are the only representative in the UK.

Enablers hit by the new penalties would be named ‘in the interest of alerting and protecting taxpayers who play by the rules and to deter those who might otherwise be tempted.’

Another controversial proposal is to reverse the burden of proof when taxpayers say they have taken ‘reasonable care’ to file accurate declarations. One proposal is to deny the defence to those who relied on generic legal advice about a scheme.

Meanwhile, to attack the ‘lifecycle’ of avoidance arrangements, the document proposes measures such as requiring promoters to provide lists of everyone to whom a scheme is being marketed and to provide HMRC information on the risks of avoidance alongside marketing material.

Experts in tax law said that the proposals are ill-considered.

Fiona Fernie, partner and head of tax investigations at international firm Pinsent Masons, said: ‘Some aspects of these proposals go too far and could end up capturing traditionally accepted tax planning.’ She warned that shifting the burden of demonstrating ‘reasonable care’ was a particular concern. ‘The time and resources it would take are considerable. Compliance costs for individuals have soared over recent years and this would be an unreasonable additional ask.

‘If a taxpayer has taken advice from a reputable professional, with no obvious reason to doubt its credibility, HMRC should recognise that for many taxpayers with no tax training, that does constitute reasonable care.’

Fernie also raised concerns about whether the new measures and sanctions would be applied retrospectively, capturing historic cases and schemes. ‘Given the emphasis placed on deterring future avoidance in the proposal, and influencing taxpayer behaviour going forward, such an approach would make little sense. A line in the sand should be drawn and clear timescales set out – the legislation should apply to all cases after a future date.’

John Cullinane, tax policy director of the Chartered Institute of Taxation, questioned whether it is appropriate to apply the concept of ‘enabling’ the criminal offence of tax evasion to defining ‘an activity which, while undesirable in the eyes of most people, is legal, provided all appropriate disclosures are made’.

He added: ‘We are concerned about a scenario where a taxpayer goes to their tax adviser for advice on risks attached to participating in a scheme, receives appropriate advice setting out these risks and the likelihood of the scheme being defeated, but decides to join the scheme despite this. It would be extremely harsh to penalise a tax adviser in this scenario where all the adviser has done is advise the taxpayer on the law as it stands.’

Jeffrey Cohen, associate at London and Surrey firm Mackrell Turner Garrett, said: ‘There has always been a fundamental principle that arranging one’s affairs to pay less tax is not illegal. Although we have seen much legislation chipping away at this, it remains a cornerstone of tax planning.’

Whether this remains the case in the current political climate, however, remains to be seen. The consultation on the proposals closes on 12 October. Any changes to legislation will be taken forward under the next finance bill, the Treasury said. The Law Society said: ‘We sincerely hope the government will design these proposals with the greatest of care, to ensure that in their desire to respond to public concern on this issue they do not inadvertently prevent millions of people from accessing legitimate professional advice on their tax obligations.’

Solicitors will also be watching closely for any legislation by stealth.