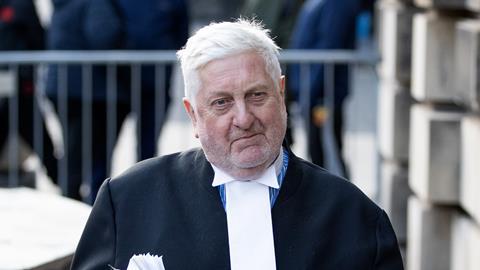 The head of the Scottish bar has said he will resign over remarks he made on a train about his client Alex Salmond and his accusers, shortly after helping the former first minister secure an acquittal on 13 charges of sexual and indecent assault.

Gordon Jackson QC said he would step down as dean of the Faculty of Advocates – the Scottish equivalent of the Bar Council – at the end of June, if not before.

In a statement on the faculty’s Twitter feed, Jackson said: ‘I have intimated my decision to resign as dean of the Faculty of Advocates, with effect from 30 June, at the latest. It would not, however, be appropriate for me to remain as dean at a time when the faculty was considering disciplinary proceedings regarding my conduct.

‘Accordingly, if, before that date, the Scottish Legal Complaints Commission remits the recent complaint for consideration by the faculty’s complaints committee, I will stand down as dean immediately. I do not intend to make any further comment.’

Jackson referred himself to the Scottish legal watchdog last month after he was secretly filmed on a train apparently making derogatory and indiscreet comments about his client Alex Salmond and female witnesses in the former first minister’s trial.

The video, which was obtained by the Sunday Times, appeared to show Jackson naming two of Salmond’s accusers, despite rules that protect their anonymity. He is also heard saying: ‘I don’t know much about senior politicians but he was quite an objectionable bully to work with…I think he was a nasty person to work for…a nightmare to work for.’

The footage was published less than a week after a jury at the high court in Edinbugh cleared Salmond of 13 charges of sexual and indecent assault, including an alleged attempted rape and an intent to rape.