When Birmingham Law Society (BLS) was established in 1818 ‘mad’ King George was on the throne, a stage coach journey from Birmingham to London took in excess of 15 hours, and the death penalty had just been lifted for shoplifting (though transportation was still an option).

Founded by 19 original members, BLS now boasts more than 4,000, drawn from law firms and barristers’ chambers across the West Midlands.

The bicentenary is not only an opportunity to celebrate this landmark anniversary, but also to reflect on the achievements, contribution and legacy of the largest legal community outside London.

We kickstarted our celebrations in early January with a special service at St Philip’s Cathedral. The deputy lord lieutenant and 12 fully robed High Court judges paraded in Colmore Row – which runs through the heart of the city’s business district – with the procession ending at the cathedral. The service included a performance by the profession’s own choir, Advocati, and an address by Sir Andrew McFarlane. It was followed by a cocktail party, attended by local dignitaries, at the Council House.

We will continue to mark the anniversary throughout the year at events, including a special Legal Awards and a gala President’s Dinner.

But perhaps most significant is our commissioning of a book to chart the history of the Society, the rise of the profession and the influence that lawyers have had on the business and civic life of the city of Birmingham.

The book has been written and edited by Dr Sally Hoban and Dr Malcolm Dick from the School of History and Cultures at The University of Birmingham.

The publication will take its place alongside BLS’s existing centennial history published in 1918, and the 150th anniversary publication in 1968.

Its contents are drawn from BLS’s extensive archive (chiefly its Minute Books), now housed in the Library of Birmingham. These are supplemented by other BLS records, newspaper cuttings and journals, and interviews with past and present members, giving a unique and fresh perspective on our history. Both Sally and Malcolm confirm that their research and findings are of national significance, shedding new light on the history of law and law societies in the provinces in the 19th and 20th centuries. 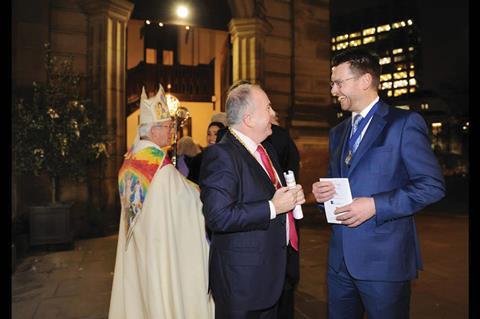 The hardback book will be around 20,000 words long and will be accompanied by photographs and other images, some of which have never been published before. Its major themes will include the foundation and development of BLS and its influential law library; how technology has changed the legal profession; diversity; the social life of BLS; the changing face of legal education; the service of BLS members in the first and second world wars; BLS and the arts; and our impact on policy, legislation and life in the city of Birmingham.

I have been privileged to see early drafts of the book and it makes fascinating reading. We think we are living in a time of rapid technological change, so imagine debating – as the minutes from an 1883 BLS committee record – whether telephones would be useful to the profession.

The first telephone was installed in the county court in December of that year. The ‘instrument’ had its own room and a dedicated clerk paid £20 per annum to mind it. What a world away from today’s exponentially developing communications technology.

Think too of how diverse the legal profession now is. Yet it was not until 1923 – more than a century after we were founded – that BLS enrolled its first female member.

The book is an absorbing account of BLS’s journey over the last two centuries, and the influence lawyers and the legal professional had as Birmingham grew to become a great industrial city, reinventing itself as the professional services and cultural hub it is now.

Which brings me on to BLS today, and our efforts to remain relevant to our members and, indeed, the wider community.

The BLS member base is a broad church. We were the first regional law society to open up our membership to barristers, for example. Bringing together solicitors, barristers, law students, paralegals and legal executives outside the tribal boundaries of their firms or chambers has been resoundingly successful and allows us to act as the ‘voice’ of the legal community.

To that end, we have 16 committees that not only allow our lawyers to share best practice but to work on consultation papers, ensuring we have a say in emerging legislation. We have submitted more than 100 consultation papers in the last five years. Brexit will have a huge impact on our laws and regulation, so this work will continue to be a vital part of our role.

Working with the Law Society we regularly involve senior leaders from local firms, so we can share best practice on a wide range of issues, including diversity, the use of artificial intelligence, GDPR and talent retention.

Raising the profile of the legal community, locally, nationally and internationally, is important to us. Through our media relations activity, our own publication, Bulletin and website, we communicate and share the views of our members, from the smallest sole practitioner to the largest international firm. As the Midlands engine becomes a powerful force for growth in the region, we want to ensure we have a seat at the top table so we can contribute our expertise and share in the benefits.

As part of our mission to help educate our members we have delivered more than 260 courses in the last five years, with more than 5,270 members taking part.

Our social calendar is just as busy, ensuring our members have the opportunity to network with peers not just in their own industry but with others working in the city and the wider region. We are also particularly proud to have raised more than £100,000 for local charities in the last five years.

In the last decade in particular, we have seen massive changes in our profession. Throughout these challenging times BLS has striven to provide a service and voice for its members. As many of our members have done, we too have had to reinvent ourselves to ensure we remain relevant. That we have been around for 200 years says a lot. Here’s to the next 200!