The solicitor general today urged social media users to make themselves aware of contempt laws after the conviction of the actor Tina Malone.

The Shameless star admitted a charge of contempt of court for publishing information purporting to be about Jon Venables, convicted of the 1993 murder of toddler James Bulger. 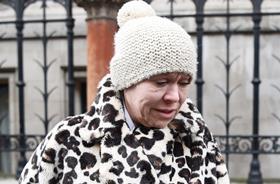 Malone was sentenced to eight months in prison, suspended for two years, after admitting the charge during the High Court hearing. The allegation related to her 2018 social media posts containing information, including images, purporting to relate to Venables.

Speaking after the hearing, solicitor general Robert Buckland QC said the injunction in this case was intended to protect the identities of the offenders and also innocent individuals who might be incorrectly identified. He added: ‘Posting this material online is a very serious matter and can result in a prison sentence. I would urge everyone to think carefully about whether their social media posts could breach the order or amount to any other type of contempt of court.’

The injunction prevents the publication of any images or information purporting to identify anyone as Venables or Thompson – whether this is online or in print.

The terms of the order mean that if someone publishes a picture claiming to be of Venables or Thompson, even if it is not actually them, they will be in breach of the order. Providing details of the new identities of these men or their whereabouts is also prohibited.