The Solicitors Regulation Authority stepped in on Christmas Eve to shut down a Kent-based firm, it revealed today. The regulator said its decision-making panel was satisfied that grounds existed to exercise its intervention powers over County Solicitors Ltd in order 'to protect the interests of the firm's clients'.

The order applies to County Solicitors' head office in Herne Bay as well as branch offices in Broadstairs, Margate and Rainham.

The firm itself ceased trading in March last year. On the basis there were no facilities to store client files and deeds, a request was made by the directors for the SRA to intervene in the remainder of the practice. This request went before an adjudication committee on 23 December and an order made. No client funds were held at the time of the intervention.

County Solicitors had been incorporated in 2016 around the same time as the administration of conveyancing firm Foster Mackay (trading as Fosters Law). Under the terms of the pre-pack sale, another firm, The Foster Partnership, paid around £120,000 while County Solicitors acquired its share of the collapsed business for £80,000 and was led by six directors previously involved with Fosters. The terms of the acquisition meant that creditors collectively lost almost £1m in unpaid debts. 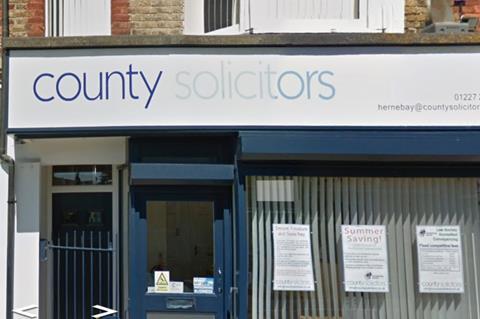 The Foster Partnership had already been made subject to intervention in October by the Council for Licensed Conveyancers, effectively resulting in its closure. The CLC cited breaches of its code of conduct and protection of clients’ interests as reasons for the action. Local media reports suggested the intervention could result in as many as 100 job losses.

Wigan firm Stephensons Solicitors has been appointed to handle matters relating to both County Solicitors and The Foster Partnership.

The original Fosters had been incorporated to take over another solicitor’s practice in 2011 and had grown to a turnover of almost £4m in 2015/16. But profits were hit following an attack by online fraudsters in August 2015, resulting in the theft of £1.1m from the client account. Although the company’s professional indemnity insurers covered these losses, the premium rose sharply the following year.

The Kent firm had no connection with similarly named practices in Hertfordshire and Norfolk.