Legal action on behalf of a female judge and female MP from Afghanistan has been put on hold while talks continue with ministers.

Letters before action were served on the Treasury Solicitor on Tuesday, the government given a deadline to issue visas to the women that would allow them to cross the border to neighbouring countries. By today, proceedings were put on hold after positive discussions with the government.

A statement from the group of pro bono lawyers working on the case said: 'Although the deadline we asked the government to work within has passed, we know they are now considering the case of the female MP and the female Judge. 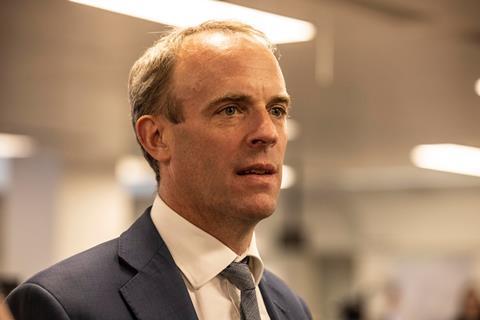 Raab says nine judges have been evacuated from the destabilised country

'We remain optimistic about them giving these two ladies and their families visas and by doing so, discharging their moral and ethical responsibilities to them. This country would be greatly enriched by their presence.'

It is understood the judge and her close family, who are also at risk, were expecting to be called forward to board an evacuation flight out of Afghanistan, but this never happened.

Through the lawyers working on her behalf, she said: 'Because of my work on women’s rights I have been threatened by a number of the Taliban, who have used violence against their wives. They said that when they would be released, they would destroy me. I am hiding with my family in terrible conditions. They are all in danger because they are part of my family. Already, one of my brothers has gone missing and we are very worried about him.'

Raab has said the UK may need to talk directly with the Taliban over helping potential evacuees to leave Afghanistan. He said the group’s co-operation with providing a safe passage out the country was an ‘important first test’ of the new regime.

It is understood justice secretary Robert Buckland has been active in lobbying cabinet colleagues to help Afghan judges. Following Raab’s appearance, Buckland said: ‘This department will continue our efforts to help all members of the Afghan judiciary who are most at risk and eligible for relocation to the UK. I am delighted the nine are safe, but there is more for us to do.’