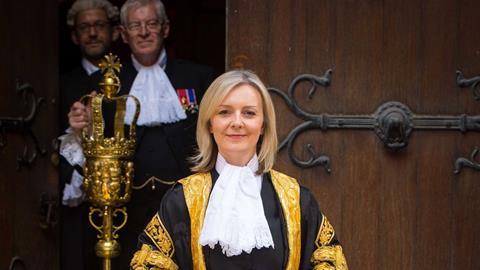 New lord chancellor Liz Truss (pictured) has set courts reform as one of her top priorities during the traditional swearing-in ceremony.

The south-west Norfolk MP was welcomed into the role this afternoon by senior judiciary at the Royal Courts of Justice, watched by her husband Hugh and children Frances and Liberty.

For her swearing-in speech, Truss – the first female lord chancellor – focused on the strength of English law and diversity.

She also stressed she was a ‘great supporter’ of reform and modernisation through the courts and tribunals system. ‘That urgent task will be high on my agenda in the months ahead, as I know it is for senior members of the judiciary,’ she added.

Watched by her new ministerial team and the attorney general and solicitor general, Truss hailed England and Wales as the most open and trusted legal system in the world, with the ‘greatest judiciary in the world’.

Truss added: ‘I would like to see that reputation more widely acknowledged at home.’

Watch the video of the ceremony

‘I saw how justice was done, the importance of trial by jury, how everyone participates in the legal process – it was an inspiring experience,’ she said. ‘I want as many people as possible to have that same experience, to understand the process of law, to want to join the legal profession and to become judges.’

Hinting at the debate about Truss's qualifications for the role, lord chief justice Lord Thomas of Cwmgiedd said it was ‘readily apparent that you have had to date a most distinguished career which has demonstrated your great skills and wide experience’.