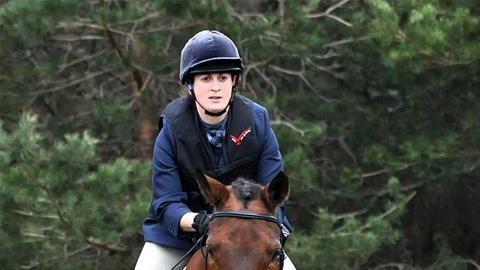 Back in the saddle

Obiter is delighted to hear that Emily Wiggins, an associate at southern firm Hart Brown, and her horse Basil (both pictured) have not only returned to the showjumping circuit after injury kept them out of competing - but have done so rather spectacularly.

We reported last year on the novel way Wiggins helped kept Basil cool in between showjumping classes when temperatures hit a high of 29 degrees celsius - by throwing buckets of water over him in between classes (Obiter assumes, judging by the current weather, that’s not necessary now).

Injury to Basil, a 17-hand Hanoverian Warmblood in his late teens, meant a four-month break from competitive showjumping. Basil strained a muscle and ligament when he slipped during a competition in March. But the pair showed they were back on fine form recently when they competed in an unaffiliated showjumping qualifier for the Sunshine Tour Championship, which will be held at Hickstead next month.

Wiggins and Basil qualified for the championship after being placed 6th out of 46 in their class.

Wiggins said: ’I was just looking for somewhere to get Basil out and jumping again. I didn’t even realise the class was a qualifier. It’s always wonderful if you manage to go double clear but I didn’t dream I would be placed. Basil jumped brilliantly.’