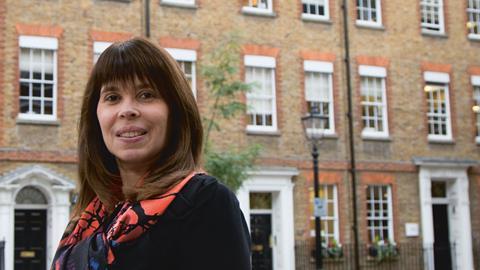 Our relationship with the built environment is changing radically and lawyers need to keep up, Helen Garthwaite tells Eduardo Reyes.

Take a stroll from the Gazette’s Bell Yard office to Wedlake Bell on London’s Bedford Row and you will encounter one of the most enduring – and appealing – built environments anywhere in the world.

One passes behind the lively gothicism of the Royal Courts of Justice and through the arch into New Square and Lincoln’s Inn. It is an arch so charmingly unchanged that, judged by filmed period dramas, you could be forgiven for thinking much of English history had unfolded there. Observant cinema-goers might have spotted it recently in Mr Holmes (McKellen, not Cumberbatch).

Passing into Lincoln’s Inn Square there is the classical reassurance of the Royal College of Surgeons and the one-time city mansions that flank Sir John Soane’s Museum. One then ducks down alleyways straight out of Dickens’ London, which run either side of Holborn. Skirt Gray’s Inn, and through another arch, and on to Bedford Row.

Hardly anything you see looks newer than 1890. And yet behind even these walls, city life has changed in fundamental ways – a fact that property partner Helen Garthwaite has spent her career urging lawyers to recognise and engage with.

‘Take this building [52 Bedford Row],’ she enthuses. ‘It’s got a Grade 1-listed facade, but the inside is relatively modern.’ Yet the office is ‘no longer a fortress with four walls’, but rather a ‘place’ connected to ‘spaces’.

Lest this sounds a little nebulous, consider that Wedlake Bell is one of a handful of commercial firms to have a formal hot-desking policy from which even the managing partner is not exempted (see ‘How to make hot-desking work’, tinyurl.com/zwg93nx). Developments in technology mean that meetings – even client meetings – will often take place in the coffee shop at the back of a neighbouring bookseller.

This policy not only reflects technical advances, but also pressure on space as activity continues to drift to our cities. ‘The drive for flexibility,’ Garthwaite explains, ‘creates a need for more rules and regulations, and “balancing”.’

Lawyers, she argues, can meet this demand by devising and negotiating agreements that will be fit for purpose in a denser environment. Space and structure must ‘do’ a greater variety of things for people, who in turn have a more complex set of relationships with each other. In this world, ‘lawyers who can come up with creative solutions and not be bound by the rigidity of their previous practice will have the ability to better harness opportunities’.

The legal agreements that govern residential property have changed little in recent years. But the same cannot be said for commercial property, where the prevalence of shorter leases, and innovations in physical material and structure, have provided opportunities to incorporate climate change considerations and a broader concern for the built environment.

By some estimates, residential properties built today will need to last 1,000 years, but the lifecycle of commercial developments is much shorter. ‘There’s only one building that I’ve ever worked on in my career that had a design life of 80-plus years,’ Garthwaite notes. ‘Some of the buildings that I’ve been involved in are now being refitted or, indeed, demolished, restructured or rebuilt.’

‘When I did my law degree,’ she recalls, ‘the planning and environmental law module was very new.’

LSE economist and professor Lord Stern provided the definitive analysis of the macroeconomics of climate change, but it is in areas such as ‘green leases’ that the microeconomics are to be found. An interest in green leases was at the heart of projects Garthwaite promoted while a partner at her previous firm, Taylor Wessing.

Two groundbreaking reports, Behind the Green Façade (2009) and Hitting the Green Wall… and Beyond (2011), looked at the response of the property development industry to the challenge of reducing its carbon footprint. They were a collaboration between Taylor Wessing and powerful industry body the British Property Federation.

Hitting the Green Wall surveyed 7,000 professionals working for developers, funders and clients, revealing the industry to be both advanced in its own response to climate change, and sceptical of the government’s ability to meet commitments without further regulation.

Three-quarters of respondents did not believe the government could meet its zero carbon target for the development sector – a contribution which is central to meeting the UK’s 2020 carbon goals. But sustainability was a ‘top-level item’ at over 80% of organisations surveyed, with ‘green agreements’ governing the work of 60%. A third asked for information on sustainability during financial transactions and 70% of contractors were shown to be setting sustainability targets.

‘Legal advice has never been given in isolation,’ Garthwaite comments, ‘[but] I think we’re more acutely aware now of the changing market our clients operate in and, indeed, the changing world. So [our] advice is not just for today but also for tomorrow.’

Of course, the role of the lawyer goes beyond advice and drafting that simply reflects client priorities. When considering what can go wrong between parties, a lawyer must also promote better communication, she stresses. ‘This means clearly representing your own interested stakeholder as client, while balancing [their] interests with an awareness of other stakeholders, [to] help bring deals to close and unlock problems before they get out of hand.’

Garthwaite believes lawyers can and should do more to assert themselves in this sector from early in their careers. ‘Clients are looking, quite often, for a wider understanding of what their requirement is,’ she notes. ‘At the junior end of the profession, people need to take this into consideration, because you don’t just arrive at being a partner and then connect with clients. It’s a process that should begin on day one.’

Billable hours targets can get in the way, naturally. But Garthwaite counsels that lawyers will struggle to differentiate themselves from competitors if they have not invested time in joining industry bodies, coming into contact with ‘technical people’, and showing a ‘width of horizon’ on these broader issues.

Garthwaite practises what she preaches. She is a member of the board of management of the British Council for Offices and of the working party of the Better Buildings Partnership on energy performance contracting.

Wedlake Bell’s specific contribution to the dissemination of best practice is a series of events and papers looking at ‘Tomorrow’s City’. By 2030, 60% of the world’s population will live in cities, with huge implications for the built environment and our relationship with it. Topics in the programme have ranged from ‘high-rise living’, to the future of the high street, and retail and transport, bringing together panels that include leading architects, developers, funders, retailers and academics.

Nevertheless, the proliferation of taller buildings, denser populations, flexible and agile working, technology and new ways of financing development are all subjects with far-reaching implications for the law. ‘Relationships need to be governed,’ she argues, ‘and rules mean a role for lawyers in orchestrating that in an ever more complex world.’

Some of Garthwaite’s recent work illustrates that complexity. She has been advising Heron International, which has devised development schemes relating to 160 buildings in nine cities, including the City’s Heron Tower at 110 Bishopsgate. She has personally advised on a concert venue for the Guildhall School of Music and Drama, the hotel and residential development known as Heron Plaza and Heron Tower itself.

Garthwaite goes on to observe that one of the most radical changes since the start of her career has been in the way property is financed. Bank finance was once the dominant source of funding in commercial property developments, but no longer.

Now funding comes in many guises, including crowd-funding. That means multiple stakeholders, including ‘the man in the street who’s put his £1,000 in crowd-funding’, and therefore multiple relationships to be governed by law.

At the same time, traditional considerations, such as ‘neighbour and land ownership issues’ have intensified with greater pressure on space.

Played right, all this adds up to a more strategic role for lawyers. ‘Lawyers are always good at the “what-ifs”,’ Garthwaite notes, ‘because we’re taught to think laterally and objectively, and raise such issues in a sensible way with a client.’

And in recent years, the what-ifs have been more to the fore than ever – coinciding with the lifetime of many projects. ‘You give advice at an early stage on a project that might run for six, seven, eight years,’ she observes. ‘During that time the background to a development really can change.’

It would not be right to conclude without mentioning the recent floods, she notes. Sustainability commitments sometimes dismissed as ‘green bling’ (or ‘green crap’, as the prime minister is reported to have said) have suddenly acquired fresh urgency, requiring industry-wide responses from developers, insurers, financers. And, of course, lawyers.