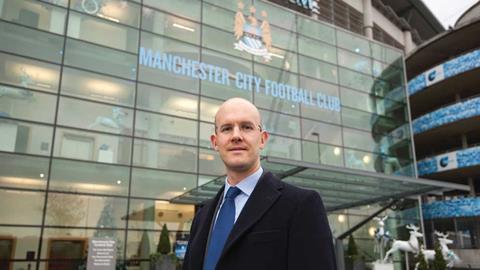 Manchester City Football Club’s first general counsel Simon Cliff talks to Paul Rogerson about his part in ‘building a structure for the future’.

Former magic circle high-flyer Simon Cliff has no regrets about leaving the City for ‘City’.

‘It was a pivotal moment in my career; a once-in-a-lifetime opportunity,’ says the ‘born-and-bred Brummie’, whose first love was Aston Villa.

One can see what he means. Manchester City’s first general counsel has just moved his legal team from the Etihad stadium at Eastlands into commodious accommodation across the road at the newly completed City Football Academy, whose modest title barely conveys the ambition that it embodies.

The 80-acre campus, which sits on what was contaminated industrial land just five years ago, reunites the club’s commercial, first-team and youth development arms, which were previously scattered across Manchester.

Boasting 16 full-size pitches, the site’s centrepiece is a new 7,000 capacity stadium that will host the Premier League champions’ elite development (reserve) games, and youth and women’s football. The reserves have recently been playing at Conference North outfit Hyde FC, which obligingly repainted its stadium blue for the term of the partnership.

I jest to a colleague that if City are ever relegated into football’s third tier – where they were playing as recently as 1999 – the mini-Etihad might be brought into use for league games.

This is unlikely. Since Sheikh Mansour’s Abu Dhabi United Group bought City in 2008, the one-time perennial crisis club has surged into the global football elite.

This is not an oligarch’s passing infatuation, however. Sustainability is at the core of Mansour’s vision, which is articulated in giant letters at the academy’s reception: ‘We are building a structure for the future – not just a team of all-stars.’

Cliff trained in corporate with Freshfields in London before moving to Shearman & Sterling, where he got his break. His last deal in private practice was to act on ADUG’s acquisition of the Premier League club and he joined Manchester City’s staff in 2009.

‘I was in the right place at the right time,’ Cliff reflects.

Since then his employer has won the Premier League twice, the FA Cup and the League Cup.

‘I had been six and a half years’ qualified, at that juncture where an associate is thinking about becoming a partner,’ he recalls. ‘It was quite a leap to move out of the City of London and go in-house. I didn’t know a single person in Manchester.’

Before Cliff arrived, City had no in-house legal function. So what does he do?

Help to draft and negotiate transfer and sponsorship deals, of course: ‘I work very closely with director of football [former Barcelona technical director] Txiki Begiristain in negotiating transfers. We now do 99% of that ourselves.’

Cliff’s team now numbers two additional solicitors (a fourth starts in January) and he also has two trainees on secondment, from Pinsent Masons and Gateleys.

They are needed. The Manchester City family now incorporates three other clubs, whose crests are mounted in reception alongside that of their parent: Japanese J-League club Yokohama F-Marinos, Australian club Melbourne Heart and (launching next year) the New York City Football Club.

‘Over the summer I visited all of them,’ Cliff says. ‘I spend a lot of time in management meetings as we try and pull the organisation together. My role encompasses oversight and understanding the business, so that I have got a proper appreciation of legal risk across the group.

‘I used to spend most of my time doing [player and sponsor] contracts, but I do less of that now.’

He adds: ‘The two major elements of the legal function are football regulatory and recruitment, and commercial. The latter incorporates sponsorship deals, to all sorts of internal supply agreements: IT, procurement – the sorts of things that go with running any business. Now I try and delegate that to the team and assume an oversight role.’

What is most interesting about the job?

‘The variety, I think,’ Cliff replies. ‘One of the challenges with the role is the relentless fascination that everyone has with football. We are always aware that everything we do has a public profile and we have to measure that against an ownership for whom integrity, and doing things the right way, is at the heart of what they do.

‘We are always very alive and attuned to protect their interests and reputation as much as our own, because we are ultimately a strong reflection of their ethos.

‘No matter how many things they do as a nation around the world, everybody understands the language of football and knows what goes on. That brings a huge set of challenges from a reputational risk perspective, which is why I work very closely with our communications department in particular.’

The job is still ‘great fun’ nevertheless: ‘I get to work with a fantastic set of people and I love coming into work. I get to interact with an ownership group in Abu Dhabi who are some of the smartest people you will meet in business. It’s an incredible privilege to learn from that.’

He adds: ‘The thing I really enjoy about it compared with private practice is being under the skin of the business – not always behaving, thinking or acting like a lawyer, but always having legal issues in mind as I help to drive the business forward.

‘We [the legal team] are completely integrated and has never operated as a team that waits for things to come along and just do some drafting. We are fortunate to have a board and CEO that understand the value of having a proactive legal team that can help navigate the minefield that is both football and business.

‘As a group of lawyers we like to get stuck in and help make things happen. It’s not always about, for example, doing what the commercial team wants, but helping to shape the wider business interest.’

Only about half of Premier League clubs have in-house general counsel, which is perhaps surprising given football’s extraordinary liquidity – and ubiquity. ‘It’s going to grow because football clubs have become large and complicated businesses. And sitting in my position, I am almost amazed more clubs don’t have them,’ Cliff says.

‘The degree of legal and business risk that sits around in football, given the amount of money there is and the environment we operate in (particularly on the football side) suggests there is a lot of value to be added by a legal function.’

City is a case in point. The club currently ranks sixth in the global money league, just two places below cross-town rivals United.  Annual income for 2012/13 was £271m, compared with well under £200m six years ago.

Football, of course, is not just any business. The major clubs are striving to maximise income to remain within European governing body Uefa’s Financial Fair Play rules, which stipulate the extent of losses clubs can incur. City has not been immune from these strictures: the club was hit with a £49m net cap on spending in last summer’s transfer market.

Cliff says: ‘Following the acquisition in 2008 it was always the ambition of the owner that this would be not just a successful club, but also a sustainable club.

‘Football clubs are strange businesses in that very few of them make profits, which is usually the main driver in business. We’ve always had in mind that we want to compete at the highest level, but also that in the medium to long-term it would be sustainable and self-supporting.

‘If you are going to support a world-leading squad of players then you need the revenue base to support that. Over the last five years we have grown revenue substantially year on year.’

He adds: ‘We are intending to break even soon and make profits, but there is always that other driver of needing to ensure we win: because at the end of the day we are here to play football and be successful on the pitch.’