Ed had a long career with the firm, joining Warner Goodman & Streat as it was known then in 1987 working within the personal injury team after spending the first seven years of his legal career training at Lawfords and co of Gray’s Inn in London, with his Uncle Bill. Ed was a passionate personal injury lawyer, particularly helping those injured at work. It is thought amongst his colleagues that Ed chose personal injury due to his strong desire to right wrongs, to protect the weak or the underdog, and because of his natural sense of justice and his strong social conscience. Ed was well known within the firm and amongst counsel for his fair but tough approach to his cases, winning many contacts and friends throughout his esteemed career.

He became a partner in 1989 and over the years also sat on the Business Team, the Management Team, and took on various other management roles. In June 2015, he began to work alongside the then retiring managing partner before taking on the role himself in 2016, handling the responsibilities that go hand in hand with this with his well known professionalism and humour, making decisions based on his love and respect for the firm. 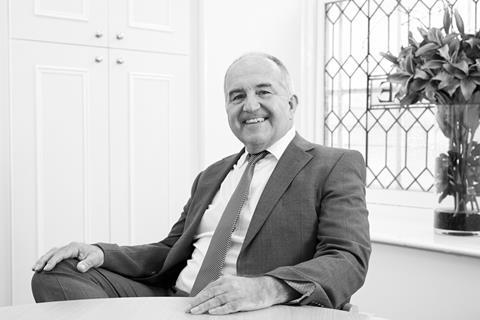 Ed Voller, affectionately known by many as 'Our Ed'

In addition to his legal expertise, Ed was a keen musician and spent many hours entertaining his family, friends and colleagues with his guitar skills, even launching a charity single in aid of the BBC Daisy Appeal. Ed always threw himself into everything he did, having previously been an active member of the Round Table, a school governor and an enthusiastic extra on TV shows and movies. Many of those who knew him will also remember with fondness his love of brewing his own beer, as well as the many team outings that invariably involved brewery tours.

Andy Munden, colleague and friend to Ed for 25 years, commented: 'We have been overwhelmed with the memories our staff have shared of Ed, as well as the memories and well wishes from those across the legal sector who knew Ed as a contact, client and a friend. Amongst the many tributes that have been shared, it’s clear to see that Ed will be remembered as an honest, genuine, down to earth gentleman, whose integrity, fairness and dedication to doing the right thing has left a mark on all of us, both personally and in our careers. Affectionately known by many as Our Ed, he always took the time to visit every office and speak to those within the teams, finding a connection with as many people as possible to make them feel welcome.

'Warner Goodman has always been a firm focussed on its people, believing that our biggest and best asset is our people, and no-one embodied that like Ed. He was not only a trusted and much appreciated colleague, but also a friend and mentor to the 160 Warner Goodman employees, and was a well respected member of the legal community.  We naturally offer our deepest condolences to his wife, his children, his grandchildren and his many friends; he will be sorely missed by everyone who knew him.