A pioneering online court in British Columbia, Canada, is to take over the bulk of road traffic accident claims in April in a model being watched with interest by HM Courts and Tribunals Service, the judiciary and government ministers. ‘We are now about to assume jurisdiction over a large part of the justice system in British Columbia,’ Shannon Salter, chair of the Civil Resolution Tribunal, told an audience in London last night.

Salter was giving the inaugural Sir Brian Neill Lecture for the Society for Computers and Law as part of the International Forum of Online Courts organised by the society and HMCTS - whose chief executive, Susan Acland-Hood, was in the audience. The two-day forum heard several references to the British Columbia court as an exemplar of the possibilities of handling many civl justice processes online - including from smartphones.

The Civil Resolution Tribunal has handled disputes over sums less than $5,000 since June 2017, with 94% settled before they come before a judge, Salter said last night. The vast majority are handled entirely online, with a high proportion of communication taking place out of office hours and via smartphones. Such a capability is vital for access to justice, Salter said: 'People on low incomes will not have a laptop or tablet computer, but will almost certainly have a smartphone.’

However Salter stressed that the online aspect is not the most important change enabled by the tribunal. Rather, 'it is the opportunity for a blank slate’. Access to justice for civil claims, starting with low value condominium disputes, have been redesigned around users with a grade six (12-year-old) reading age rather than lawyers. At the first stage in the procedure, users are offered access to an online tool called a 'situation explorer', and then human mediation. Only 6% of claims get to tribunal members. 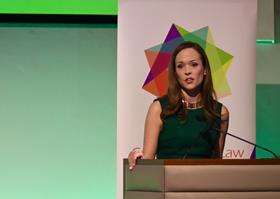 Salter: opportunity for a blank slate

Case proceedings are immediately and automatically published online, Salter said, which has improved awareness of the system by encouraging media reporting.

Going online has enabled the courts service to overturn the conventional historical model, she concluded. ‘The whole common law legal system is based on the assumption that you will get in front of a judge. We know that’s the wrong assumption 98% of the time, but the whole system is still based on the idea you will have your day in court. We turned that on its head.'

Salter is among delegates from more than 20 countries attending the online courts forum, which yesterday heard calls from the lord chancellor and lord chief justice for the system in England and Wales to embrace new digital ways of working.