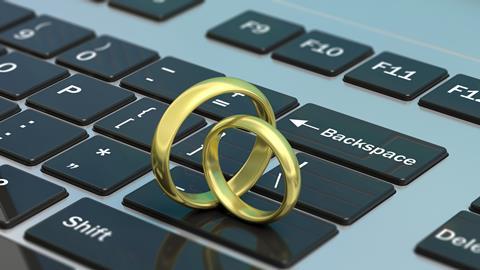 Getting a divorce will move a significant step closer to becoming a paper-free process when HM Courts & Tribunals Service’s digital portal becomes mandatory for new applications next week.

From Monday, legal representatives will need to process divorce applications via the MyHMCTS online service rather than using the paper Form D8. Exceptions are applications for civil partnership dissolution, judicial separation and nullity, which should be filed at Bury St Edmunds regional divorce centre.

Paper applications will continue to be processed in a transitional period to 4 October, HMCTS said.

More than 150,000 divorce applications have been processed since the digital service was introduced in 2018 as part of the government’s £1bn courts reform programme.

Juliet Harvey, chair of family law group Resolution, said many of the group’s members and clients have benefited from the digital service - but the process ‘has not been without hiccups’.

Harvey said: ‘One of the biggest issues is that the platform was initially designed for citizens (litigants in person) and development of the professionals’ platform has seen additions and enhancements to that platform, rather than a bespoke platform designed for lawyers.

‘A major issue that remains is that it is not possible to move between the two platforms. If a petitioner litigant in person wishes to instruct a solicitor to deal with the divorce after issue, the case comes off the digital platform and proceeds on paper through the Bury St Edmunds Divorce Unit.

‘In financial proceedings, if the respondent starts as a litigant in person, but later is represented, the platform cannot presently handle a Notice of Change. This means that the case would come off the digital platform and move to a paper-based process - negating the benefits of the online platform. This is an issue that HMCTS are aware of and are planning to deal with when launching the new divorce platform to deal with no-fault divorce under the Divorce, Dissolution and Separation Act.’

Claire Andrews, an associate in the family department at Osbornes Law, said petitioners are now able to go through the divorce process easily without the assistance of a lawyer, enabling lawyers to focus on the financial arrangements, ‘which is often the most important element of divorce but can get overshadowed by the previously archaic and slow divorce process’.

However, she said: ‘At the moment, if you are respondent, a lawyer cannot assist you online, which means you have to talk your client through the process and they have to do it themselves. Fortunately, I understand this is changing to take the pressure off clients who are unable to deal with the technology.’

Family lawyer and arbitrator Tony Roe said the court service had a lot of work to do on the digital platform between now and 6 April, when provisions under the Divorce, Dissolution and Separation Act, commence. ‘This is a golden opportunity to get it right bearing in mind the lessons learned,’ he said.