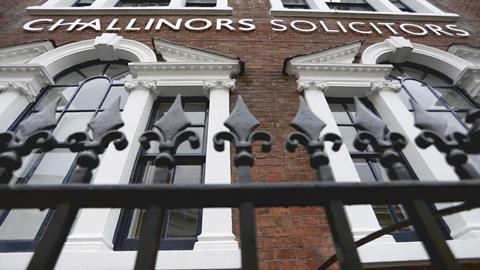 Troubled Midlands firm Challinors has finally gone in to administration, the administrators announced today, revealing that attempts to sell it as a whole have failed.

The move followed a statutory demand by a creditor and the announcement of the sale of four parts of the business. The administrator said that 46 redundancies had been made.

A statement from administrator RSM Tenon said that 13 offers had been made for parts of the business.

National firm Clarke Willmott today announced it has acquired ‘elements’ of Challinors’ private client and commercial litigation teams, along with 10 members of staff.

Andrew Hosking and Simon James Bonney, joint administrators, said that to protect clients, all the live client files were transferred to the new firms prior to the administration.

Hosking said: ‘All possible steps have been and will continue to be taken to minimise the impact of the administration on clients and protect their confidentiality. We tried to sell the business as a whole but after limited interest it was clear, the disposal could not be achieved for the appropriate considered value and in the necessary time frames.

‘Therefore, regrettably the business had to be broken up into several constituent parts. The sale of the various parts of the business was made pre-appointment.’

Monies held in the firm’s client account have been fully reconciled and will be overseen by the independent solicitor manager appointed to ensure client protection. Challinors owes more than £11.2m to unsecured creditors.

Hosking said that most of the employees made redundant have already been able to secure jobs with the purchasers.