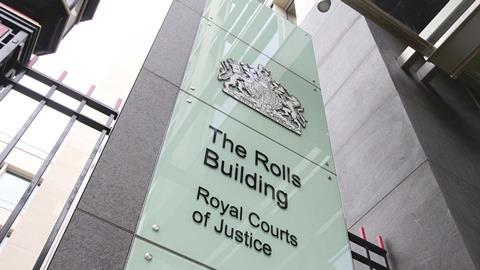 London base for global forum of commercial courts

England & Wales have agreed to administer a new permanent body liaising between the world’s leading commercial courts, the judiciary announced today. A report of the first meeting of the Standing International Forum reveals that the secretariat, based at the Rolls Building (pictured) ’will be able to support, coordinate and enable’ activities of the forum, set up at the initiative of the lord chief justice Lord Thomas of Cwmgiedd.

The inaugural London meeting, on 5 May, was closed to the press. However the judiciary statement said that commercial courts from five continents - Europe, Africa, Asia, Oceania and North America - attended. The included representatives of jurisdictions with long established courts offering and those with more recent offerings in an increasingly competitive market. ’The representation was without exception at senior judicial level, including heads of commercial court,’ the statement said.

Participants agreed on the feasibility of cooperation and collaboration between all jurisdictions. ’The shared willingness to provide help to developing countries was also affirmed. The discussion then extended to enforcement, case management, technology, best practice, and the relationship between commercial courts, arbitration and mediation.’

Among the next steps are for the forum to produce a multilateral memorandum that explains how, under current rules, judgments of one commercial court may most efficiently be enforced in the courts of another. New York will host the forum’s next meeting, in autumn 2018.