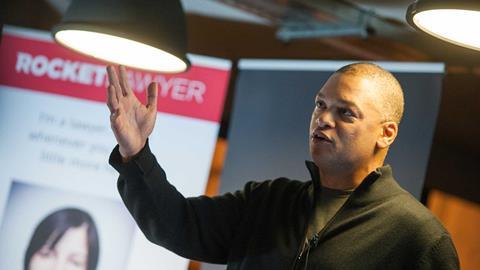 Blockchain, best known for enabling virtual currencies such as Bitcoin, works by creating a constantly updated record of transactions across a so-called shared ledger. Enthusiasts claim that such ledgers become tamper-proof, making them ideal for securing valuable data such as property titles or records. Absolute security also opens the possibility of creating self-executing contracts; insurance policies that pay out when certain events occur, for example.

Rocket Lawyer was set up in the US in 2008 to enable customers to create legal documents online. It opened a UK arm in 2012 and last year secured a regulatory waiver under the Solicitors Regulation Authority’s ‘safe space’ scheme to provide new types of legal advice.

Its latest offering, through a tie up with blockchain company ConsenSys, is a service for contract execution called Rocket Wallet. According to the company, it will create smarter transactions that are managed by a network, rather than a central authority. The system will be beta-tested to invited users this year and offered commercially in the first half of 2019, the company said.

Founder and chief executive Charley Moore (pictured) said the collaboration would 'increase access to justice by closing the gap between contract execution and trusted, secure performance of agreed-upon obligations'.

Although the company claims it will be the first to apply blockchain to everyday legal transactions, numerous other businesses are investigating the technology. Insurance giant Axa last year began testing smart contracts for handling flight delay claims.