Litigation Handbook: Practice and Procedure in the Business and Property Courts

Surprising as it may seem, a search in the Law Society bookshop for books dealing with litigation would, until July 2021, have yielded no results, an omission (presumably) identified and (certainly) rectified by solicitor-advocate Adam Chafer in this, the first edition of his handbook.

Like all Law Society publications, this book is not pretending to be something that it is not. It is £250 cheaper, and contains some 3,266 fewer pages, than Blackstone’s most recent edition of its weighty civil practice guide, so presumably does not have the same target readership in mind. It contains a comprehensive summary of The Framework of the Civil Justice System (Part 1), Stages of Civil Procedure (Part 2) and Common Interim Applications in Civil Procedure (Part 3), all written in a style which successfully navigates the very fine boundary between assuming no prior knowledge of the subject, and managing to avoid being overly simplistic. 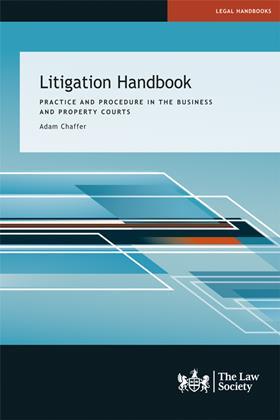 This book could be compared to a really thorough set of notes from a carefully prepared and well-presented civil litigation course. It is straightforward enough to introduce newcomers to the subject, and explain key concepts, in an accessible and easily understandable manner, while also being just detailed enough for more experienced litigators to reassure themselves that their understanding of those same concepts and their related procedures are still up to date.

For example, despite only running to 10 pages in total, the chapter on the overriding objective and the court’s case management powers is as good an exposition of these two areas as I have seen in the 22 years which have passed since they were introduced under the CPR. The same applies to the chapter which covers relief from sanctions. That begins with an explanation of the ‘sizeable cultural shift’ brought about by the Jackson reforms. It then works towards a concise summary of the current case law on relief from sanctions via sections on case management and the sanctions regime, and methods of extending time limits to avert default and sanctions occurring in the first place.

There is a brief explanation of the foundations of the Business and Property Courts in the first chapter and, at appropriate points, short sections on procedures which only apply in those courts (such as the Disclosure Pilot Scheme contained in CPR PD 51U; the best practice approach to witness statements embodied in PD 57AC; and the Flexible Trials Pilot Scheme which we are told is ‘now a permanent feature of the civil justice system within the Business and Property Courts’ following its introduction in CPR PD 57AB). But most of the contents of this book deal with the generally applicable basics which form the bedrock of our civil litigation system.

It will be interesting to see how future editions of the handbook build on this very strong first outing. A chapter on enforcement would be a welcome addition, as would some basic precedent pleadings in key areas, but even in its present form this is a very ‘handy’ handbook, and worthy of its place in the Law Society publications canon.