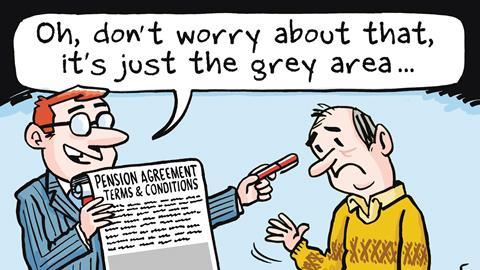 There is an old story about a man who insists that his next lawyer must only have one arm. Why? ‘Because I’m fed up with being advised that “on the one hand this, on the other hand that”.’

That man would no doubt be horrified at the answer which the courts have recently given to a question concerning the pensions of bankrupts. Rather than a yes or no answer, two cases have given a yes and no answer.

The question is whether a pension which has not been drawn down by the bankrupt, but which he is able to elect to draw down, is ‘in the nature of income… to which he from time to time becomes entitled’ for the purposes of an income payments order (IPO).

Since 1999, most pensions have been excluded from the estate of a bankrupt. This was the effect of section 11(1) of the Welfare Reform and Pensions Act 1999, which provided that: ‘Where a bankruptcy order is made against a person on a petition presented after the coming into force of this section, any rights of his under an approved pension arrangement are excluded from his estate.’

However, income from a pension can potentially be the subject of an IPO because section 310(7) of the Insolvency Act 1986 expressly includes ‘(despite anything in section 11 or 12 of the Welfare Reform and Pensions Act 1999) any payment under a pension scheme but excluding any payment to which subsection (8) applies’ (subsection (8) refers to guaranteed minimum pension payments). It is therefore clear that a pension in payment can be the subject of an IPO, and that a pension which the bankrupt has no entitlement to draw down cannot.

The grey area is a pension which the bankrupt could choose to draw down, but has not chosen to do so. Can that income be accessed for the benefit of creditors?

The question first came before the court in Raithatha v Williamson [2012] 1 WLR 3559 (Bernard Livesey QC). The judge considered the submission that the lack of an election by the bankrupt meant that he had  no entitlement to the income was ‘an attractive argument’, but went on to ask whether the legislature would have intended to make this technical difference between pensions which the bankrupt had, or had not, elected to draw down.

He held that such distinction would create an anomaly and that: ‘The proper interpretation… is that a bankrupt does have an entitlement to a payment under a pension scheme not only where the scheme is in payment of benefit but also where, under the rules of the scheme, he would be entitled to payment merely by asking for payment.’ He did not make a decision on the amount of the IPO.

This decision was controversial and gave rise to practical problems. These were set out by the author of this article in Re X (Application for Income Payments Order) [2014] BPIR 1081 as follows: ‘In para 36 of [Raithatha], the judge refers to the bankrupt being entitled to payment merely by asking for payment, but that begs the question: payment of what? Where there is more than one option, which option? How, acting under this section [310], would the court determine that? In effect, the court is removing the bankrupt’s right to decide how to take his pension as well as his right to decide when to take the pension.’

In that case the bankrupt, if electing to draw down the pension, was also required to make elections between potential benefits, in particular whether to take up to 25% as a tax-free lump sum. The trustee sought the full 25% lump sum as ‘income’. On the facts, no IPO was made because that would have the effect of reducing her annual income to a level below her reasonable domestic needs.

The question returned to the High Court in Horton v Henry [2014] EWHC 4209 (Robert Englehart QC). The judge held that the word ‘entitled’ suggests a reference to a pension in payment under which definite amounts have become contractually payable. Referring to paragraph 36 of Raithatha, he considered that a bankrupt is not entitled to payment merely by asking, but by making election(s).

Section 310 does not give the court power to decide how a bankrupt should exercise his election(s), nor does the trustee have that power – that would be inconsistent with the 1999 act. Accordingly, he declined to follow Raithatha.

The result is two directly conflicting first instance decisions, which produces complete uncertainty for bankrupts and their trustees. As stated by the judge in Horton: ‘It is to be hoped that the Court of Appeal will soon have the opportunity of considering which of these two… decisions is correct.’ In the meantime, two-armed lawyers will be required.