Commentators keep making the point about the Trump firework show that the other branches of the US government, with the system’s inbuilt checks and balances, are working vigorously, despite – or because of - the stresses his administration has put on them.

The EU is going through its own crises, and its institutional structures are being similarly tested. The European Commission and the European Court of Justice have delivered opinions and decisions in the last few days which will prove in due course how robust is its commitment to enforcing its own values.

The UK is causing problems on the western edge of the union with Brexit. But on the eastern edge, the EU faces a different problem: governments of an illiberal strain, prepared to push the rule of law to its extreme. Brexiteers are advised to look away now, because the responses of the EU may not be to their liking.

One of the main crises concerns the independence of the justice system. As was widely publicised, the Commission asked the Polish authorities last week not to take any measure to dismiss or force the retirement of Supreme Court judges, warning that if such measures were taken, the Commission would activate the mechanism in Article 7(1) of the Treaty on the European Union, which provides for the eventual suspension of voting rights. 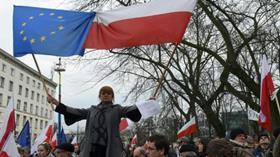 Article 7 is an extreme measure to hold countries accountable for rights violations. EU countries must meet rules on democratic governance and human rights in order to join the union. When Article 7 was introduced, it was seen as a way of calming anxieties that nations with difficult pasts might fall back into bad habits. It has never so far been used.

The second crisis is over immigration, and the role of the EU institutions in being able to enforce EU-wide solidarity in welcoming asylum seekers, who are unduly burdening Greece and Italy. Last month, the European Commission announced its decision to launch infringement proceedings against Poland, Hungary and the Czech Republic for refusing to take in asylum seekers. Asylum seekers still pour daily into Italy, but some governments refuse to play their part in relocation.

Slovakia and Hungary brought a case against the Council decision on the EU’s mandatory relocation scheme for asylum seekers, which had been introduced to relieve Greece and Italy after the mass migration of the summer of 2015. This week, the Advocate General of the Court of Justice, in one of a rush of decisions and opinions before the summer break, gave his opinion that their case should be dismissed.

You will not be surprised to hear that Poland intervened in the court to support Hungary and Slovakia. Seven Member States, not including our own (despite our voting in favour of the measure at the Council), intervened on the other side, in support of the Council. The opinion is long and complex, but one of its elements is the solidarity which Member States are expected to show each other in the field of asylum. The Advocate General makes clear that solidarity is one of the founding and existential values of the EU.

These two issues, independence of the judiciary, and solidarity in treatment of asylum seekers, are complex and sensitive. They raise matters of national sovereignty, but equally of EU values. If the EU is not to take action to uphold them, what is its point any longer?

The final interesting development relating to enforcing EU values came in a very different setting. The European Parliament referred the planned agreement between the European Union and Canada on the transfer of passenger name record data to the Court of Justice, to see whether the agreement was compatible with EU law and, in particular, with provisions relating to respect for private life and data protection.

This was the first time the Court had been called on to give a ruling on the compatibility of a draft international agreement with the EU Charter of Fundamental Rights. And it declared that the agreement envisaged between the EU and Canada may not be concluded in its current form because several of its provisions are incompatible with EU fundamental rights. Although the UK had an opt-out, it decided to opt in to the agreement, and so is covered by the opinion.

The US, with which I began, is not like the EU. It is a single country, even if there is wild talk these days of California seceding (Calexit). The EU is a union of sovereign states, and has to keep a delicate balance between enforcing its values to retain its meaning, and not outraging the sovereignty of its member states. There would be more outrage, and more talk of leaving… if our country was not making such a hash of its own departure.