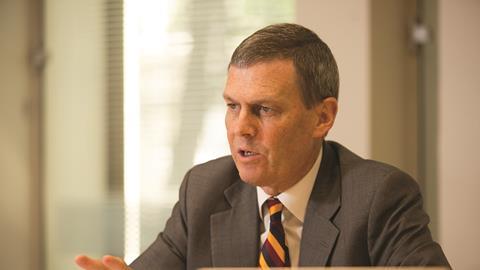 A couple of years ago, Graham Vinter, chair of a new independent body that aims to promote the rule of law across the international business community, was ‘seriously considering retirement to improve (his) golf handicap’. He had just stepped down after nine years as general counsel of multinational gas and oil company BG Group and, after 35 years in practice (27 at magic circle firm Allen & Overy), was tempted to call it a day.

The siren call of the golf course, however, was muffled by the opportunities offered by international US firm Covington & Burling (Covington), which in September 2016 recruited Vinter to head its project finance team.

‘I wasn’t expecting to go back into private practice,’ he says. ‘I’d had a number of offers, ranging from partnership to non-executive directorship, but the Covington opportunity attracted me the most.’ The job involves setting up a project finance group ‘from scratch’, Vinter explains. Progress has been fast, with around 20 project finance practitioners leaving international firm Chadbourne & Parke to join Covington’s new team. Since Vinter came on board, Covington has also opened offices in Johannesburg and Dubai.

Vinter has an impressive track record in project finance. Along with Gareth Price and David Lee, two former A&O colleagues, he co-authored the seminal work Project Finance, first published in 1996 and now in its fourth edition.

Suitably re-energised, in January this year Vinter became chair of the Bingham Centre for the Rule of Law’s new business network. Since its launch in 2010 the centre, named after the illustrious Tom Bingham, has carried on the eminent judge’s good work, undertaking a range of projects in the UK and internationally to promote and enhance the rule of law worldwide.

The new business network, launched in January 2017, is independent of government and acts as a bridge between the centre and the business community, here and overseas. At its launch, Vinter said: ‘As multinational companies develop their supply chains and markets both at home and around the world, they are encountering a complex set of legal risks, including contractual enforceability, regulatory predictability, and bribery and corruption in all its forms, none of which can be addressed without the rule of law. We hope that (many more) companies will support this important initiative.’

He tells the Gazette that there is a direct correlation between a nation’s prosperity and its respect for the rule of law, adding: ‘Investors are more likely to pump money into states where the rule of law is sovereign.’ Otherwise, he warns, they risk governments unlawfully seizing their key assets or providing no protection for intellectual property rights, which opens the door for fraudsters to counterfeit goods and sell them on the open market. There is also the danger of retrospective taxation and the unenforceability of contracts.

The network is now around six months old. What has it achieved to date? ‘Our first project was to build capacity and understanding among senior and mid-level management, including legal departments and at board level,’ Vinter replies. ‘We launched with the support of BP, BT, Diageo, HSBC, Shell, Unilever and Vodafone, and were subsequently joined by Nestlé and Rolls-Royce. All of these companies have extensive experience of operating in overseas jurisdictions and are aware of the pitfalls and challenges.

‘We are actively looking to recruit more companies, and not just big corporations. Small and medium-sized enterprises can also contribute to our understanding of the challenges encountered by businesses. The same is true of companies from emerging markets. It would be great if they also join.’

Is the network’s focus on emerging economies? ‘By no means exclusively,’ Vinter responds, ‘but certainly much of our work is directed at them or at countries recovering from war.’ Some of the best work done by the Bingham Centre has been in Africa, where it has worked with young business leaders to persuade them that the rule of law is of benefit to their companies. ‘But you can’t approach the rule of law in a way where it’s perceived by a developing market as being almost the imposition of western values – that’s the sensitivity that’s there at the moment. The goal is to get the young leaders to be (rule of law) advocates.’

The whole issue is ‘complicated’, he stresses. ‘How do you help a business in a country which allows child labour, for instance? And, should companies be doing business in such a country anyway? There’s no easy answer and we need to look at each case individually. The risk is we might be doing more harm than good. Will you really raise standards by insisting that workers involved in the supply chain are paid a living wage? How do you enforce it? How do you prevent bad practice disappearing underground? At the BG Group, we insisted that suppliers shared our standards, but do all businesses have the same capacity to identify and resolve rule of law abuses?’

Of course, in the business and human rights arena we already have the Ruggie Principles. Is the Bingham network simply reinventing the wheel? Vinter responds: ‘The centre and the business network unreservedly support the Ruggie Principles. They stand on their own, but at the same time there are instances where there is a conflict between the principles and the rule of law. We are researching these conflicts and plan to produce guidance for businesses.’

Known for: inaugural chair of the Bingham Centre for the Rule of Law’s new business network; co-authored Project Finance, now in its fourth edition

Vinter acknowledges that the US and UK are hardly immune from questionable practices. The financial crisis of 2008, for example, reduced banks’ lending capacity to the real economy by trillions of pounds. In 2009, the International Monetary Fund put the cost of clearing up after the crisis at £7.12tn – equivalent to £1,779 for every man, woman and child on the planet.

What could the centre’s business network, in the UK specifically, have done to counter the bad practices that caused the 2008 financial meltdown? ‘The network is genuinely independent,’ Vinter stresses. ‘It is not a business and neither is it a government agency. Its members, all highly experienced business people, enjoy enhanced credibility because of their impartiality. They can bring pressure to bear on government to stop bad practices and avert disaster.’

The UK government is democratically elected and the rule of law is central to our way of life. Surely our governments are blame-free? Vinter points to threats to business emanating from the UK government, such as the successive windfall taxes on North Sea oil and gas production imposed first by Labour chancellor Gordon Brown and later by Conservative chancellor George Osborne. These sudden hikes in tax hit share prices hard, stalled continued investment in opening new oil and gas fields, and put in jeopardy the livelihood of the many thousands of people employed by the industry, he says. The additional revenue generated by the windfall taxes was used for short-term gain – keeping voters happy by not increasing prices at the petrol pump, for instance.

Vinter gives a second example – financial penalties against companies. The most notorious of these was probably the $4.3bn fine imposed on Volkswagen for falsifying the level of diesel emissions produced by its vehicles. These penalties are, he says, ‘a handy way for governments to extract large sums of cash to subsidise their budgets’, but is it really the best and only solution to corporate dishonesty? Are governments genuinely disinterested or is there more than a hint of expediency? The money is useful, not least because it allows the administration to avoid imposing unpopular tax rises on voters.

More generally, there are few grounds for complacency regarding the UK’s or, indeed, the US’s track record on the rule of law. The World Justice Project Rule of Law Index 2016 published the findings of interviews with 110,000 households and the results of 2,700 expert surveys in 113 countries throughout the world. Countries’ rule of law performances were measured against criteria that included constraints on government powers, absence of corruption, open government, fundamental rights, and order and security.

Venezuela, Cambodia and Afghanistan were ranked 113, 112 and 111 respectively, whereas Denmark, Norway and Finland came in first, second and third. The US was number 18 in the index and the UK number 10. Must try harder.